SAMMY HAGAR Says THE CIRCLE's U.S. Tour With NIGHT RANGER Might Get Postponed

Sammy Hagar and Michael Anthony have commented on the status of SAMMY HAGAR & THE CIRCLE's previously announced U.S. tour with NIGHT RANGER.

During an April 7 appearance on SiriusXM's "Trunk Nation", Hagar and Anthony were asked if THE CIRCLE trek might get postponed as a result of the coronavirus pandemic which is currently sweeping the globe.

Hagar said (hear audio below): "Well, Live Nation says until further notice, they're just leaving things as they are. But there's a possibility of it postponing the first leg, and then we'll look at the second leg.

"The good thing about our tour is we're in three legs — we're July, August, September," he continued. "So if July gets canceled, or postponed, we move it to October, and then we can start in August. We can keep stacking it around. Then we get into the winter, and we'd have to go indoors or something.

"Listen, I'm gonna get out there and play," Hagar said. "Otherwise, I'm gonna go crazy. And I don't want Mikey breathing down my neck: 'Hey, Sambo, hey, when are we going out? Hey, Sambo, when is the next gig?'"

Added Anthony: "My wife is breathing down my neck to get my ass out of the house. You know, the only thing that's really crazy, though, now is I'm starting to read in the trades and stuff like that, they talk about when everything starts to calm down and they're letting people out again or whatever, it might take a while for the concert business to build back up, because a lot of people still might be kind of gun shy, so to speak, to go to a concert and be around a bunch of people like that."

WHITESNAKE recently pulled out of SAMMY HAGAR & THE CIRCLE's tour with NIGHT RANGER so that frontman David Coverdale can undergo surgery for bilateral inguinal hernia.

THE CIRCLE's first album of all-original material, "Space Between", was released last May via BMG. 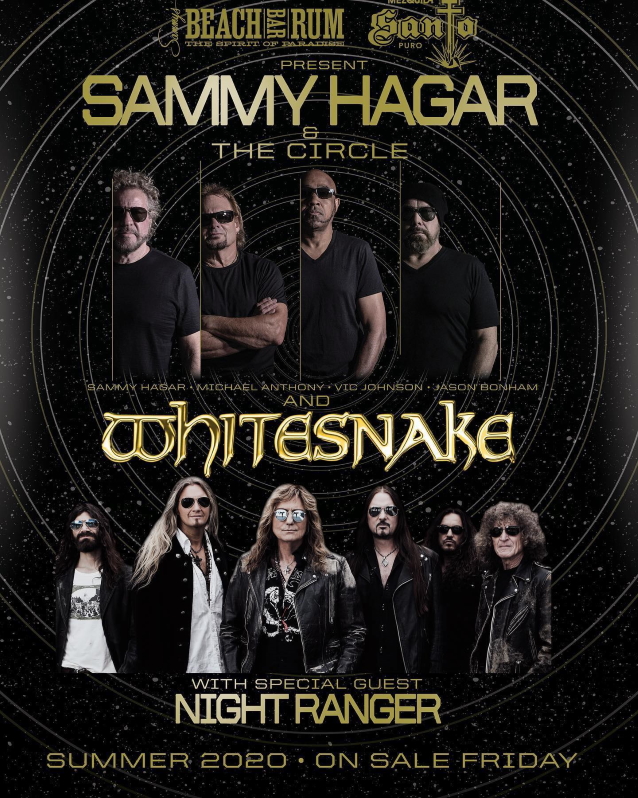