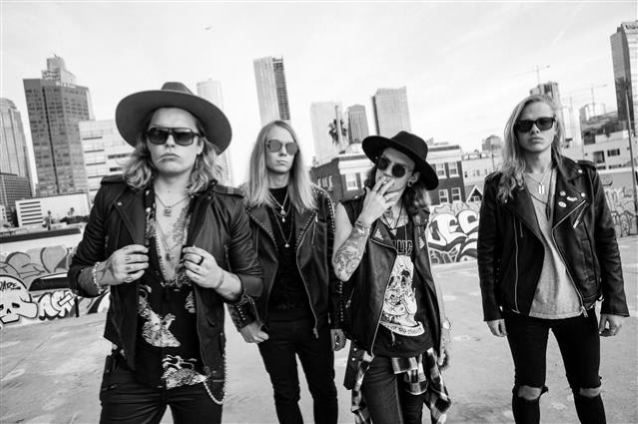 SANTA CRUZ Unveils Lyric Video For 'Into The War'

Finnish hard rock quartet SANTA CRUZ will release its fourth album, "Katharsis", via M-Theory Audio on October 18, two days before the group hits the road with ATREYU on a month-long North American tour.

Today, the group — which has recently shared European stages with the likes of BON JOVI, STEEL PANTHER and WHITESNAKE, and whose current single, "Tell Me Why", continues to gain traction on America's active rock radio charts — unveils the third advance taste of the new album, the uplifting and anthemic "Into The War". A lyric video for the song, designed by Rafael Ortega of Ecliptic Visions, can be seen below.

"Into The War" is also available for streaming across all digital platforms and is one of three "instant-grat" tracks that are being offered with digital pre-orders of "Katharsis". The album features cover art designed by Tim LeNoir (GUNS N' ROSES, THE ROLLING STONES, IMAGINE DRAGONS).

Produced, engineered, mixed and mastered by Kane Churko (FIVE FINGER DEATH PUNCH, OZZY OSBOURNE, PAPA ROACH),"Katharsis" marks the beginning of an exciting new chapter in the story of SANTA CRUZ, which made impressive waves on both sides of the Atlantic in the five-year period following the release of its acclaimed 2013 debut. In Europe, the group scored two Top 5 albums in their home country, supported the likes of AC/DC and delivered memorable performances at major events such as the U.K.'s Download festival. In America, meanwhile, the band appeared on the AXS TV program "Breaking Band", played notable gigs such as Rock On The Range and the inaugural Motörboat cruise and toured alongside I PREVAIL, THROUGH FIRE, AMARANTHE and Sebastian Bach.

Halfway through an American tour with FOZZY last year, however, founding member Archie Cruz and his then-bandmates parted ways. Soon after, Archie temporarily relocated to Las Vegas to write and record "Katharsis" with Churko at the city's Hideout Recording Studio (IN THIS MOMENT, DISTURBED, HALESTORM). "The whole year was very spiritual for me," Archie recently told Kaaos TV. "I had to reevaluate myself, my goals, what I wanted to do... When the whole fallout happened, I saw this as a great opportunity for me to finally put myself out there creatively, the way I wanted to do it for the longest time. It was a blessing in disguise, really."

While "Katharsis" is not a concept album per se, several of the album's 11 tracks ("Changing Of Seasons", "True Believer", "Salvation") address Archie's journey to rebuild SANTA CRUZ. Other songs tackle relationships, for better ("Testify") or worse ("It Was You"). Perhaps the album's most eye-opening moments, meanwhile, are its two riveting power ballads, the plaintive "I Want You To Mean It" and the soaring "Smoke Signals". And lest anyone think that the group has lost its affinity for the music of the 1980s, the album's closing track is a faithful but adrenalized cover of Cyndi Lauper's iconic No. 1 hit "Time After Time". As a whole, "Katharsis" is an exciting, diverse and — dare we say? — mature album that should appeal to fans of classic Sunset Strip hard rock and modern hard rock alike.

Prior to hitting the road with ATREYU, SANTA CRUZ — which earlier this month played its first-ever concerts in Mexico and Brazil — will appear at two of the fall's biggest rock festivals, Louder Than Life (Louisville, Kentucky) and Aftershock (Sacramento, California),where they will perform alongside the likes of GUNS N' ROSES, SLIPKNOT and TOOL. European tour dates will be announced in the near future.

SANTA CRUZ is (left to right): 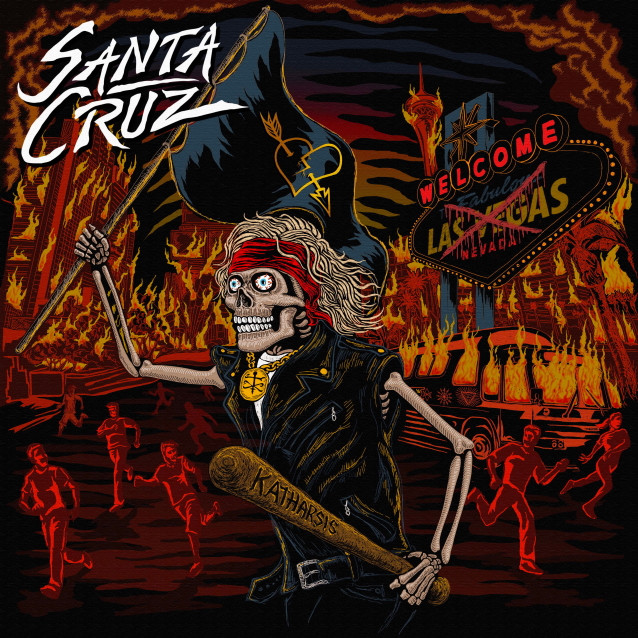