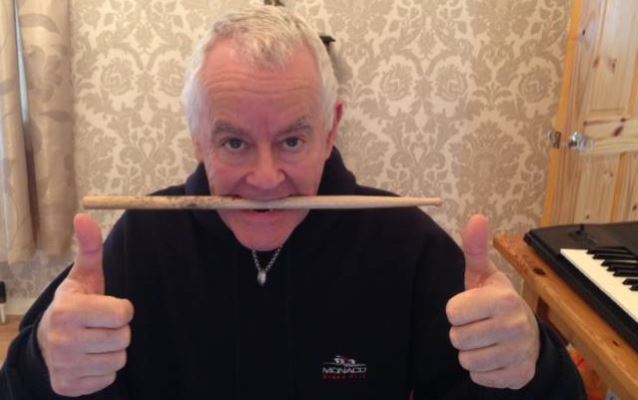 Two months after suffering a life-threatening ruptured brain aneurysm, SAXON drummer Nigel Glockler has "made a full recovery" and is "okay to get back to work."

Nigel was rushed to hospital in December and has underwent two surgeries. Filling in for him for SAXON's rescheduled U.K. tour was Sven Dirkschneider, the son of legendary ACCEPT frontman Udo Dirkschneider.

In a new statement posted on the SAXON Facebook page, Nigel says: "I am pleased to say that the neurosurgeons have informed me that I have made a full 100 percent recovery and there is zero damage at all from the ruptured aneurysm, mainly due to the part of the brain it was located in. This means that I am okay to get back to work, but I am told to ease back into it and on my own timeframe — meaning whatever I am comfortable with. To that end, I have started to work on getting my stamina back up and I look forward to being back full time very soon.

"Thank you all again for the support and well wishes!"

On Saturday, February 7, Glockler was back behind the kit for one song, "747 (Strangers In The Night)", during the band's set at O2 Shepherd's Bush Empire in London, England.

Video footage of the "747 (Strangers In The Night)" pre-concert soundcheck, featuring Nigel Glockler on drums, can be seen below.

SAXON's originally scheduled U.K. shows were due to be the culmination of the band's 38-date European "Warriors Of The Road" tour celebrating the band's 35th anniversary. The setlist featured tracks from what is known to the fans as "The Holy Trinity" — SAXON's seminal albums "Wheels Of Steel", "Strong Arm Of The Law" and "Denim And Leather".

As previously reported, SAXON and veteran Los Angeles metallers ARMORED SAINT will team up for a few select shows in U.S. this spring.

SAXON will also appear at the Rock On The Range festival in Columbus, Ohio the weekend of May 15-17.