SAXON frontman Biff Byford has canceled his previously announced solo tour, scheduled for April and May. The cancelation is mainly due to low ticket sales, which may or may not have been affected by the current worldwide coronavirus disease 2019 (COVID-19) pandemic.

Says Biff: "The honest truth is the tickets for the forthcoming tour have just not sold as everyone expected for whatever reason, so we have cancelled the dates as scheduled with a view to hopefully re-visiting at a later date. It's sad as I was looking forward to the spoken-word and live band show but it's just not to be at this time.

"I want to thank everyone who bought the album and supported me. Keep the faith and see you on the road with SAXON."

The show was to take an "evening with" format and be split into two halves. The first half would have featured a spoken-word show compèred by American comedian and star of VH1 Classic's "That Metal Show" Don Jamieson, where Don would quiz Biff on all aspects of his life and career. The second half would have consisted of a live show with Biff and his band.

Ticket refunds are available from point of purchase.

"School Of Hard Knocks" fulfils Byford's long-standing wish to explore rock 'n' roll a little more. The album is a personal journey highlighting his life and his passionate interests, from the history of the Middle Ages to growing up in the industrial North. A classic, masterfully constructed old-school British hard rock album, "School Of Hard Knocks" embraces a variety of musical genres.

Announcement About Biff's Solo Tour - for full details head over to the Saxon Official page on Facebook: https://t.co/nAvJua6COxpic.twitter.com/YiuT9FtIrG 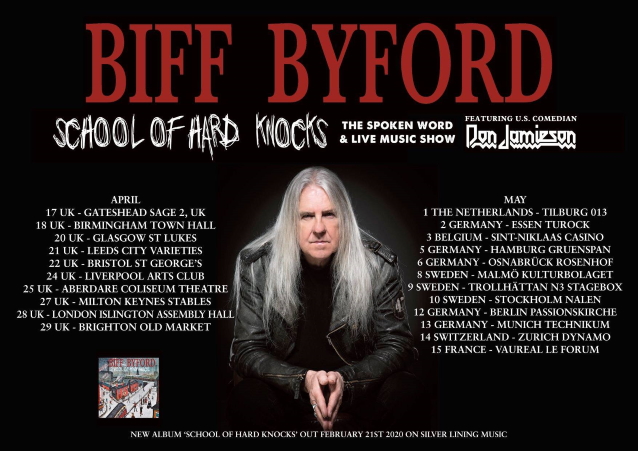