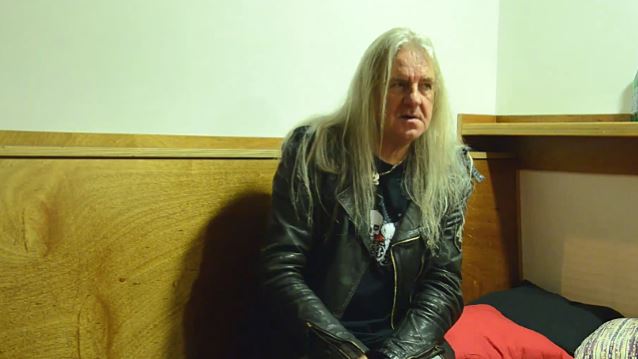 Thorium magazine conducted an interview with vocalist Biff Byford of British heavy metal legends SAXON on December 3 at Le Bikini in Toulouse, France. You can now watch the chat below.

Asked if he thinks SAXON's most recent albums are musically connected to the band's classic eighties efforts, Byford said: "I think if you listen to [2013's] 'Sacrifice', it has a very similar energy to the eighties albums. In fact, when we do the show, we start the show with 'Motorcycle Man' and the second song is 'Sacrifice', so you can hear the similarities."

He continued: "I think, over the last ten years, we have a little bit more of a heavier edge to our music, but I still love to write melodies and anthemic things that people can sing. But I think that the 'Sacrifice' album does connect with the eighties albums. And I don't know why. It may be just an accident. [Laughs] I don't know why. If we knew why, it would be fantastic, it would be great. But each album is different."

Byford added: "We start writing the next album in January, February and March, record it. So I don't know… Will it be like 'Sacrifice'? Comme ci, comme ça [Editor's note: French for "like this, like that."]."

Regarding how SAXON has managed to reinvent itself over the years, Byford said: "I don't think it's really reinventing yourself. I just think it's staying true to your roots, and to try and experiment a little bit, to bring different music, a different style of… Not to change too much, but to be unpredictable. I think that it's very, very important to be unpredictable, so nobody can say, 'Ah, it's the same old thing.'"

SAXON drummer Nigel Glockler was rushed to hospital on December 8 after suffering a brain aneurysm (a bulging, weak area in the wall of an artery that supplies blood to the brain). He has since undergone two surgeries and is slowly recuperating.

SAXON was forced to postpone the remaining dates on its UK tour due to Glockler's health issues. The UK shows were due to be the culmination of SAXON's 38-date European "Warriors Of The Road" tour celebrating the band's 35th anniversary. The setlist featured tracks from what is known to the fans as "The Holy Trinity" — SAXON's seminal albums "Wheels Of Steel", "Strong Arm Of The Law" and "Denim And Leather".

As previously reported, SAXON and veteran Los Angeles metallers ARMORED SAINT will team up for a few select shows in U.S. next spring.

Confirmed shows are May 8 in New York City at B.B. King Blues Club & Grill, May 9 in Worcester, Massachusetts at the Palladium and May 30 in West Hollywood at House Of Blues, with additional dates being considered.

SAXON will also appear at the Rock On The Range festival in Columbus, Ohio the weekend of May 15-17.