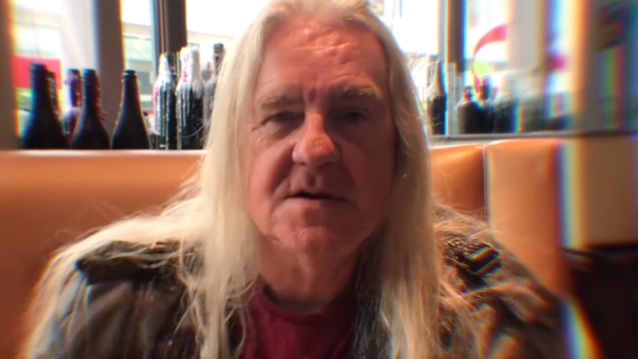 SAXON's BIFF BYFORD On Musical Direction Of His Solo Album: 'It's Mixed In All Sorts Of Styles That I Like'

Regarding the album's musical direction, Biff said (hear audio below): "It's mixed in all sorts of styles that I like. It's about my voice, really. There's a couple of prog songs I wrote with Fred with OPETH. And they're fucking ridiculously heavy. And I wrote a couple of songs with Nibbs [Carter, SAXON bassist]. And then everything else I wrote myself… I wrote a song to my wife for our anniversary; we've [been together] 25 years this year. So, yeah, that's a bit of a sloppy ballad. I'm a big JOURNEY fan as well. I like all types of stuff, as long as it has a strong melody."

He continued: "I think if you release a solo album, it has to be something of you in it. I mean, there is a couple of songs that could be on a SAXON album, without a doubt. One in particular, called 'Hearts Of Steel', I really should have used for SAXON. It's a song about the Knights Templar. It would have gone well with SAXON, but I put it on the solo album instead."

Byford told "Rock Talk With Mitch Lafon" in April 2018 that he had seven songs written for his solo disc, adding that the record would probably feature a number of guest musicians. "I'm gonna ask various people [to appear on the record]," he said. "It's not easy for guitarists to work with you, because they just smack down their signature solo and off you go. Singers, I might do some duets and things. We'll see. I wanna get the songs written first, and then see who wants to work on them. I'll probably have a nucleus of a drummer and a bass player, although I might play bass myself. I've still got my Rickenbacker."

Asked why he just doesn't use the extra material for a future SAXON album instead of setting it aside for his solo disc, Biff told "Rock Talk With Mitch Lafon": "Well, I did. Actually, 'Roadie's Song' [off SAXON's 2018 album 'Thunderbolt'] was a solo album project. And I do move them across all the time. And actually, originally, 'They Played Rock And Roll' was a solo-album idea [that also ended up on 'Thunderbolt']. So I do that all the time. And I do have songs that me and Nibbs have written for SAXON that I didn't think were right for SAXON that might end up on my solo album."