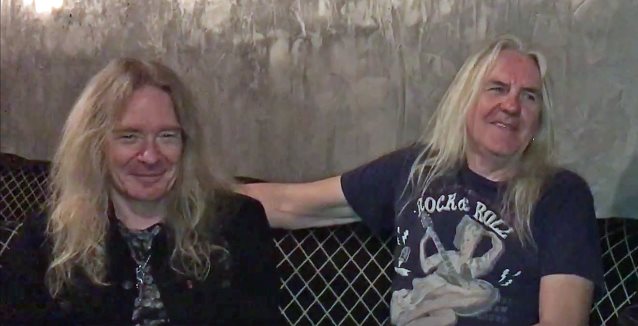 On March 16, former ANTHRAX singer Neil Turbin conducted an interview with SAXON frontman Biff Byford and guitarist Doug Scarratt for Canada's The Metal Voice at the Belasco Theater in Los Angeles, California. You can now watch the chat below. A couple of excerpts follow (transcribed by BLABBERMOUTH.NET).

Biff: "We've recorded seven songs already. I finished the vocals just before we came [to the U.S.], actually. We've actually got three or four more songs, but I think we're gonna write three more for the album. We'll rent a studio when we're on festivals — about a week in the studio — and then we'll write some songs. It [is being recorded with British producer] Andy Sneap. He's gone off to do [the new] JUDAS PRIEST [album] while we are here. In September, we'll be finished with that, hopefully. It will be out in 2018, maybe January."

On his memories of touring with MOTÖRHEAD:

"Our first tour of the U.K. — well, our first tour ever, actually — was with MOTÖRHEAD. We'd just written 'Wheels Of Steel'; it was about to come out. We used to go out every night, seven o'clock on stage, doing our thing, and Lemmy would come out after our show, on their show, and say, 'You've gotta buy their album. These guys are great. They're gonna be huge,' or whatever. So he helped us out a lot in those early days. He gave us his stamp of approval. It was nice of him. Lemmy was very intelligent, well read and he had a great sense of humor. He was a bit like me — he had a wicked wit about him."

"Lemmy was ill. He was actually iller on the American leg than he was on the European leg. We finished in Scandinavia in December, and we all said goodbye for a Christmas break, and we were starting again in January; in London was the first show. And he died shortly after that. I don't think he expected to die, because he was actually feeling a little bit better, but he was told he got cancer in the brain, and it wasn't long after that before he died. He sent me a text message a couple of days before he died saying he thought the tour was great, blah blah blah, and next thing I knew, somebody phoned me up and said, 'Lemmy's gone.' So it was a bit of a shock. But he went in the Lemmy style, really. He didn't linger in a hospital, did he? He died with his boots on."

On whether he would ever reunite with former SAXON members for a special one-off show:

"No. Not in this universe, no. I have to be loyal to the guys [current band], you know. I mean, Doug's been in the band longer than they were. I don't see any point, really. We're headlining huge festivals in Europe, so what would be the point? I mean, it would be all right for the fans — I understand that — but our fans have gone on and moved on to the new SAXON, and that's the way it is. I'm sure UFO get asked exactly the same thing about Schenker. 'Are you ever gonna go out with Michael Schenker again?' Their answer is, 'I don't know.' Probably not, I suppose. I don't know. But maybe. You never say never, can you? But as it stands now, no."

SAXON recently revealed that the band's forthcoming follow-up to 2015's "Battering Ram" will include a song dedicated to MOTÖRHEAD. "[It's] called 'They Played Rock And Roll', 'cause that's what Lemmy [late MOTÖRHEAD frontman] used to say every night [from the stage]," Byford told Sonic Shocks. "It's basically about early MOTÖRHEAD — '79/'80 MOTÖRHEAD, like around 'No Sleep 'Til Hammersmith', 'cause that's the tour we were on, that one. So, yeah, it's about the band, really, and their music."