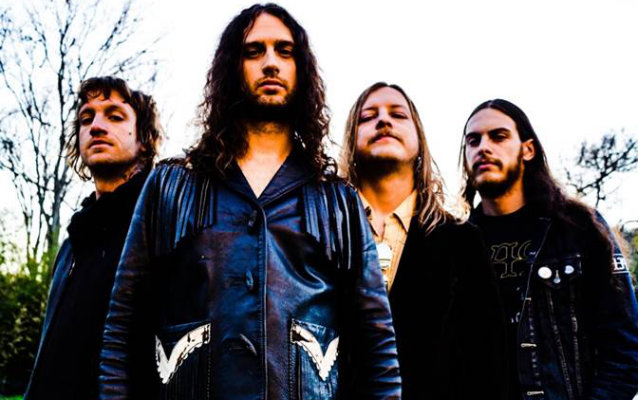 Austin rockers SCORPION CHILD have released a video for the first track on their debut album, "Kings Highway". Opening with the sound of cicadas, the clip was directed by award-winning stop-motion animator Jess Cope (STEVEN WILSON, STORM CORROSION, DEVIN TOWNSEND) of Owlhouse Studios, whose talents have been seen in the short film "The Astronomer's Sun", the British children's television series "Postman Pat", and Tim Burton's feature film "Frankenweenie".

SCORPION CHLD frontman Aryn Jonathan Black says the following about the video: "Jess Cope's work for our new 'Kings Highway' video is masterful! We are enamored by her artistic eye and ability to create a fantasy trip with an ethereal visual that's captivating and timeless."

SCORPION CHILD recently added a new face to its lineup: drummer Jon "Charn" Rice, formerly of JOB FOR A COWBOY.

Before heading out to the U.K. for nine shows starting March 16, SCORPION CHILD will have a showcase at this year's SXSW festival in Austin, Texas.

SCORPION CHILD's self-titled debut album sold around 900 copies in the United States in its first week of release. The CD landed at position No. 26 on the Top New Artist Albums (Heatseekers) chart, which lists the best-selling albums by new and developing artists, defined as those who have never appeared in the Top 100 of The Billboard 200.

"Scorpion Child" was released on June 25, 2013 via Nuclear Blast Entertainment, the new U.S. partnership between Nuclear Blast owner Markus Staiger and former Roadrunner Records A&R chief Monte Conner. Produced and arranged by Chris "Frenchie" Smith (THE ANSWER, ...AND YOU WILL KNOW US BY THE TRAIL OF DEAD, THE TOADIES, DAX RIGGS),the CD was recorded using analog recording technology.