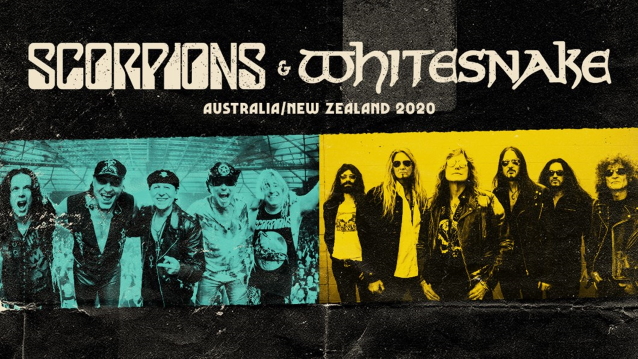 SCORPIONS and WHITESNAKE have announced the cancelation of their February 24 concert at the Brisbane Entertainment Centre in Brisbane, Australia.

The show was called off just hours after SCORPIONS singer Klaus Meine revealed that he had undergone surgery to remove kidney stones.

Here is the full statement from the venue announcing the Brisbane concert cancelation:

"Unfortunately due to a medical emergency within the SCORPIONS tour party, the SCORPIONS and WHITESNAKE show scheduled to take place at the Brisbane Entertainment Centre tomorrow, Monday 24 February 2020 has been cancelled.

"Tickets purchased by credit or debit card will be refunded in full (including ticket insurance premium and refundable ticket purchase, if relevant) and patrons do not need to take any action. Patrons should allow up to 15 working days for the refund to appear in their account.

"If your credit or debit card has been permanently closed/cancelled, please supply Ticketek with updated details in order to process your refund.

"Patrons who purchased tickets in an Agency using cash or EFTPOS will be contacted via phone in the next 15 days to arrange for a full refund. Alternatively, you can contact Ticketek.

"Further refund enquiries should be directed to ticketek.com.au."

SCORPIONS and WHITESNAKE had previously scrapped their February 22 show in Sydney to allow Meine enough time to recover from the procedure.

In a social media post earlier today, Klaus said that he experienced a "painful attack" after performing with SCORPIONS on Wednesday in Melbourne. He went on to say that he doubted he would be back on his feet until early next week.

This is not the first time SCORPIONS have called off a show in Sydney. Back in November 2018, the German band had to cancel its appearance in the city while supporting DEF LEPPARD on an Australian tour.

SCORPIONS are scheduled to enter a studio in Hannover, Germany in late March to begin pre-production on the new album. The LP will be recorded in Los Angeles in May and June, before the band takes over the Las Vegas Strip later in July with its exclusive headlining residency show.

Unfortunately due to a medical emergency within the Scorpions...