As they gear up for their 55th anniversary this year, SCORPIONS, one of the most iconic and influential hard rock bands of all time, have announced that they will be taking over the Las Vegas Strip later this year with their exclusive headlining residency show. Promoted by Live Nation and Caesars Entertainment, SCORPIONS "Sin City Nights" kicks off Saturday, July 4 at Zappos Theater at Planet Hollywood Resort & Casino. SCORPIONS will be joined by special guests QUEENSRŸCHE.

"We are very excited to come back to Vegas in July 2020 for a nine-show residency at Planet Hollywood Resort & Casino's Zappos Theater," said singer Klaus Meine. "We're looking very much forward to share some wild 'Sin City Nights' with all of you on the famous Strip … Let's get ready for the Sting!!!!"

Citi is the official presale credit card of SCORPIONS "Sin City Nights". As such, Citi cardmembers will have access to purchase presale tickets beginning Monday, January 20 at 10 a.m. PST until Thursday, January 23 at 10 p.m. PST through Citi Entertainment.

In addition, Caesars Rewards members, Caesars Entertainment's loyalty program, and Live Nation and Ticketmaster customers will have access to a presale beginning Wednesday, January 22 at 10 a.m. PST through Thursday, January 23 at 10 p.m. PST.

The nine performances going on sale are:

General ticket prices begin at $40, plus applicable tax and fees, and may be purchased online at Ticketmaster.com/scorpionsvegas or in-person at the Planet Hollywood box office. All shows begin at 8 p.m.

With over 110 million records sold around the world, SCORPIONS will play fan favorites from their incredible catalog, including "Wind Of Change", "Still Loving You", "Rock You Like A Hurricane", "Send Me An Angel" and many more.

Founded in Hannover, West Germany in 1965, SCORPIONS were part of the first wave of metal in the 1970′s with their debut album, "Lonesome Crow", released in 1972. The band rose to arena status with seminal releases "Lovedrive", "Virgin Killer" and "Animal Magnetism". In the '80s, SCORPIONS amassed a string of Billboard chart toppers from "Love At First Sting" and "Blackout", including multiple Top 10 singles "Rock You Like A Hurricane" and "No One Like You", as well a string of successful singles such as "Send Me An Angel", "Still Loving You" and "Wind Of Change".

The band was also ranked No. 46 on VH1's "Greatest Artists Of Hard Rock" and their hit "Rock You Like A Hurricane" also landed as No. 18 on VH1's list of the "100 Greatest Hard Rock Songs." Celebrated across the globe, the iconic rock act has sold more than 100 million albums worldwide and has received multiple honors including World Music Award winners, a postage stamp in Brazil, a Star on Hollywood RockWalk, and Echo honors. Most recently, they were honored with the Lower Saxon State Award. 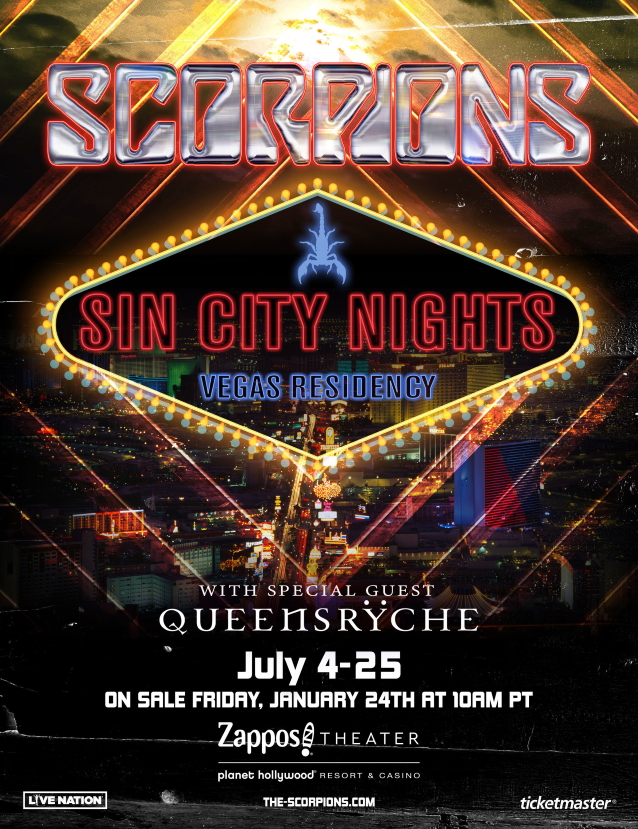