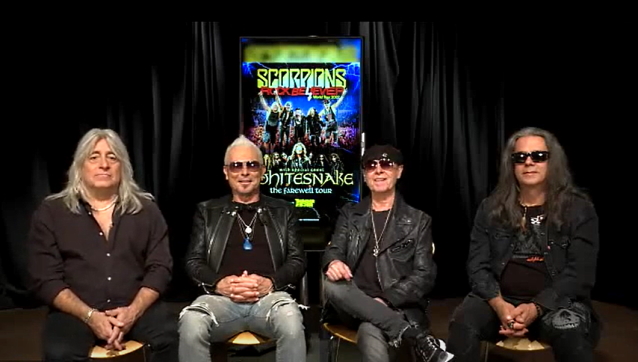 In a new interview with Bonnie Laufer, SCORPIONS singer Klaus Meine spoke about his band's recent return to performing live after a two-year coronavirus-related break from the road. He said (as transcribed by BLABBERMOUTH.NET): "I think we were very lucky that when we finished the last tour, around 2020 in Singapore, we had started writing new songs already in 2019, so we could use the time of all those lockdowns in the best way to record [our new album] 'Rock Believer', and now it's been released in February and we just started with the residency in [Las] Vegas. So it feels like we're back in the groove. And it feels so good. We could make the best use out of these miserable days and times. In the studio, just coming together, we locked the door and left the cruel reality, COVID-19, pretty much outside the door. We were in our own bubble creating new music and thinking about hopefully we'll be out there on the road again and playing new songs with a new production. And fortunately, it seems like with the pandemic slowing down, it seems like we're back and coming every other day a little closer to our normal life."

Fresh off of their sold-out "Sin City Nights" Las Vegas residency, SCORPIONS will kick off a two-month-long Live Nation-produced run of dates on August 21 in Toronto, with additional concerts in Los Angeles, Detroit, Chicago, Dallas, and Denver, among others. In addition to WHITESNAKE, Swedish band THUNDERMOTHER will be joining the tour.