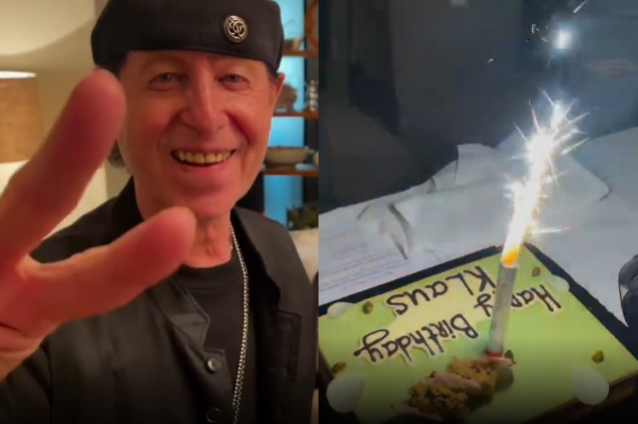 May 25 marked the 74th birthday of SCORPIONS singer Klaus Meine. In the video below, he can be seen celebrating the milestone with his bandmates and friends while on the road in Prague, Czech Republic.

Meine told the Phoenix New Times in a 2017 interview that the aging process has forced the SCORPIONS to scale down their touring activities — they no longer play three shows in a row or even attempt to perform some of the earlier songs in the original key. He said: "When you listen to songs from 'Blackout', like 'No One Like You', [or] 'Big City Nights', it's physically impossible [now] to do those songs in the original keys. You want to play those songs, but you want to survive 100 shows a year. So some of the songs we play in different keys, but the energy is still there. You're still at the top of your voice. Even now, you've got to go to the edge, but maybe the edge has moved a little bit."

Earlier this month, Meine assured fans during an interview with Jorge Botas of Portugal's "Metal Global" that there is no more talk of retirement, as there was back in 2010 with what was purported to be a final SCORPIONS album and a farewell tour that never quite took hold. "No, we scratched that word [retirement] out of our [vocabulary]," he said. "It's not there. We don't think about it and we don't talk about it and we take it as it comes.

"Who would have thought two years after the pandemic… The pandemic is not gone, unfortunately, but two years after this long, long break… We played the last show before we started [our residency] in Las Vegas on the 5th of March, 2020 in Singapore; that was the last show," he continued. "So it's scary. We never had such a long break. And then all of a sudden you're back in front of an audience, in front of the fans. But then you know it feels so good, and it still feels so good after all these years.

"We're just growing older and we do what we do and we hope our fans enjoy it as much as we do," Klaus added. "But who would have thought we're still around after celebrating 50 years of being recording artists — our first album came out in 1972 and now 'Rock Believer' looks like it hits the big time with the fans and so many positive reviews from all over the world. And after all these years, who would have thought? And it's a wonderful thing.

"But all we know is [that] the road ahead is way shorter than what's behind us. And we never take it for granted —we never take success for granted. We work hard on what we do because we still love it and we still enjoy it. But it's what it is. And I think every artist knows what I'm talking about, because to go out there, play a great show for the fans and not let 'em down, it takes a lot of preparation, takes a lot of work. And being the singer, you try to make sure your pipes are in a good condition.

"It's a lot of things," Meine said. "And we don't know what the future will bring. Take a look at the next corner, and you never know what's going on. But right now, life is good. We have a great new album out there. And we have a lot of fun. We enjoy it."

Meine previously discussed SCORPIONS' aborted retirement in a 2018 interview with SiriusXM. "The thing is we have a much different view now," Klaus said. "And it's a young generation — that's the fuel that keeps us going, and it's really motivating.

"To be honest, every other year, you take a look around the corner: 'Can we do this?' 'Can we still deliver on the same high level, the way we used to do it?'" he admitted. "And that's the only way, and it's only fun if you can go out there and play a great rock show, wherever you do it. Like in the last couple of weeks, we had so much fun. But then you get sick on the road, like I did last year with the severe laryngitis. What can you do? There's not a chance. And then sometimes, of course, you ask yourself, 'How long can we do this?' Especially for singers — and I know I'm not the only one. But it's always, sometimes you ask yourself, 'Klaus, c'mon, how long can you keep up this level?' And then you go out there, everything feels good."

Circling back to SCORPIONS' 2010 "farewell tour" announcement, Klaus told SiriusXM: "Of course, we had our moment of doubt when we said, 'Okay. Maybe we should retire. Maybe this is a good moment.' And then we realized we were wrong, because there's still a lot of sting in the tail, so to speak, and it still feels good. There's such a demand for the SCORPIONS, and we're one of the few bands who play this global stage. If there wasn't this kind of demand, of course, there's no point after so many years, and you'd better go, 'Well, I go home and take it easy.' But there's such a strong demand and that really feels good and challenging — it's a challenge. Of course, you don't do it for the business. It's a good business, yes, but you don't do it for the business and for the money — you do it for the fun, you do it for what's inside of you, what's in your blood, what's in your veins, and that's the rock and roll music. And you wanna go out and play in front of an audience, because that's what it's all about."