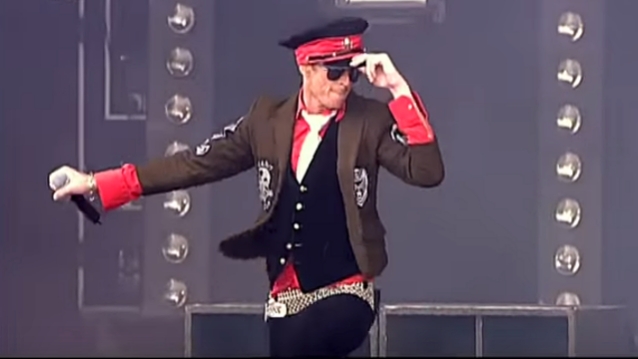 Scott Weiland's widow Jamie Weiland is selling two of his VELVET REVOLVER-era hats on eBay, each with a starting bid of $3,500.

A message on the eBay auction page reads: "Scott Weiland's Black and Red Skull Hat from VELVET REVOLVER Days – Authentic. This hat was gifted to me by my late husband before he passed. It has been protected from light, dust, etc. in a container in my home. A certificate of authenticity will be included. Please message me if you have any questions."

Jamie explained her decision to sell the hats in a message on Instagram. She wrote: "My husband gifted these to me years ago and they've been carefully cared for, and despite my affinity for #hats I never wore them. I am selling them – they're on eBay and the auction closes soon. I would prefer to, of course, keep them but due to some not fun changes in my life, I need to part with them. If you're interested please let me know and I'll send you the link. Much love #scottweiland #velvetrevolver."

More than three years ago, Jamie filed a claim against Scott's estate, saying he owed her $64,406. Jamie said she and Scott signed a prenuptial agreement before their 2013 wedding which provided that the musician would put $2,000 into a separate account each month that they were married, with a provision that the amount would increase by seven percent annually. But Jamie said Scott had only made two deposits by the time he died in December 2015.

TMZ said that the document was "cut and dried," stating "what was his before the marriage remained his, and vice versa." In addition, the agreement waived Jamie's right to spousal support. However, this past August, Weiland's creditor's claim against the estate was denied.

Scott Weiland's second wife, Mary Forsberg, who is also the head of the estate, had previously argued that Jamie did not file the paperwork properly and her claim had since lapsed.

This past April, the IRS filed a federal tax lien against Weiland's estate, alleging he did not pay his federal income tax from 2012 to 2014. The lien listed Mary Weiland as his representative.

Last year, Weiland's estate was hit with a lien by the California State Tax Franchise Board for almost $250,000. The estate was also ordered by a judge to pay $4,000 a month to the late STONE TEMPLE PILOTS singer's children.

Mary Forsberg was Weiland's second wife and mother to his children, 18-year-old Noah and 16-year-old Lucy. His first marriage to Janina Castenada lasted from 1994 to 2000.

Forsberg posted a brutally candid letter about Scott at RollingStone.com following his death, writing that his children "lost their father years ago. What they truly lost on December 3rd [2015] was hope."

Weiland was found dead on his tour bus at the age of 48 from a toxic mix of drugs and alcohol. The vocalist was also dealing with self-medication, estrangement from his children, financial difficulties and a steadily increasing drinking problem.

Jamie told Billboard in an interview that Scott had been experiencing episodes of paranoia and mania caused by bipolar disorder.

My husband gifted these to me years ago and they’ve been carefully cared for, and despite my affinity for #hats I never wore them. I am selling them - they’re on eBay and the auction closes soon. I would prefer to, of course, keep them but due to some not fun changes in my life, I need to part with them. If you’re interested please let me know and I’ll send you the link. Much love 🖤 #scottweiland #velvetrevolver