Former SKID ROW singer Sebastian Bach has announced the newly rescheduled dates for the second leg of his tour celebrating the 30th anniversary of the band's self-titled debut album. The trek, which was originally set to start later this month, will now take place this fall, starting on October 28 and running through December 15, with special guests STITCHED UP HEART. All dates have been rescheduled and tickets and VIP upgrades purchased will be honored at the newly scheduled dates, with the exception of Regina, Uncasville and Roanoke. Fans who purchased tickets and VIP upgrades for those three shows will need to contact their point of purchase for refunds.

Earlier this month, Bach provided the following statement addressing the tour’s postponement: "Due to extreme circumstances outside of our control, we will be postponing the 2nd leg of the 30th Anniversary tour from March 25th thru May 11. The key word is postponed! I was really looking forward to rocking out with you all this spring, but multiple cities along the tour have forced public gathering cancelations, which is beyond my control. It is also VERY important to me that my family, my band and crew and my extended family AKA my fans stay safe and healthy. In the meantime, I am going to continue to work on new music!"

On the fall 2019 leg of the tour, Bach usually opened the 15-song set with "Tornado" — the "Skid Row" LP's final track — and "Forever" before the singer performed the rest of the LP in order. As an encore, Sebastian played two songs from SKID ROW's 1991 album "Slave To The Grind": "The Threat" and "Monkey Business".

Last June, Bach issued an "open invitation" to the other members of SKID ROW's classic lineup to "get onstage and jam" during the vocalist's recent tour. A few days later, during an interview with Finland's Kaaos TV, guitarist Dave "Snake" Sabo confirmed that he would not accept Bach's latest overture. "I'm working with my band," he said. "This is SKID ROW, and this is what I do." 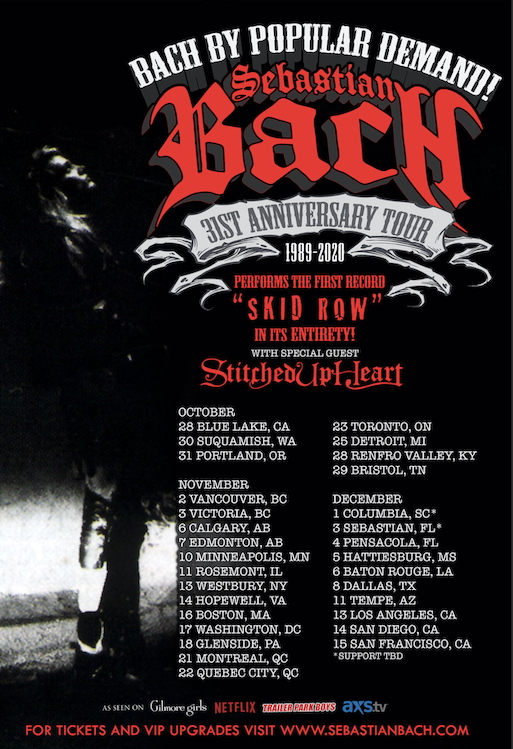