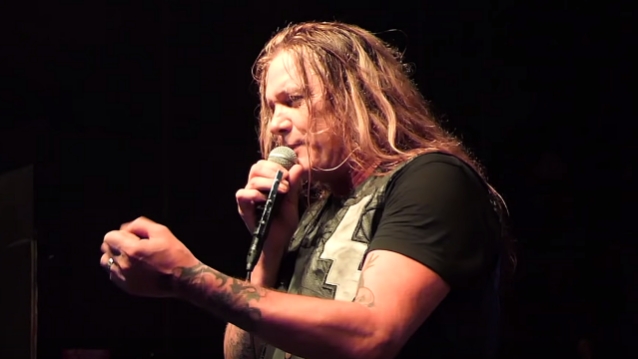 Sebastian Bach has once again slammed lawmakers for failing to enact tougher guns laws after a teenager shot five fellow students in a killing rampage at a Southern California high school.

Nathaniel Tennosuke Berhow pulled a gun from his backpack Thursday at Saugus High School in the Los Angeles suburb of Santa Clarita, shot five students at random and then shot himself in the head. He died the following afternoon.

After KTLA published an article on Thursday saying that Berhow was described by his neighbors and classmates as "a quiet kid," the former SKID ROW singer took to his Twitter to write: "Like @deesnider always said: 'he was a quiet boy.' Well FUCK being QUIET #FUCKGUNS #fucktheNRA + fuck anyone who values a gun over the life of a child" He also added a middle finger emoji.

The following day, Bach weighed in on a Los Angeles Times opinion piece which claimed that "there are five types" of mass shooters. He shared a link to the article and included the commentary: "There is one type. An asshole with access to a gun in the United States of America. Only."

Sebastian previously voiced his views on guns in early August after back-to-back mass shootings in the United States left at least 29 dead and 53 injured in Texas and Ohio. At the time, Bach repeatedly lambasted President Donald Trump, Senate Majority Leader Mitch McConnell, Vice President Mike Pence and other Republican leaders for their inaction on gun regulation. "You and your useless Republican party don't give a fuck about the safety of the citizens of the USA," the former SKID ROW singer wrote in response to a tweet of consolation from Ohio senator Rob Portman. "Your 'prayers' are a slap in the face to the 30 people who were mowed down yesterday because of your uselessness."

According to ABC News, 58 percent of Americans express confidence that stricter gun laws would reduce mass shootings; 41 percent are skeptical.

Like @deesnider always said: "he was a quiet boy." Well FUCK being QUIET #FUCKGUNS#fucktheNRA + fuck anyone who values a gun over the life of a child 🖕 https://t.co/ae25W7WgGh

There is one type. An asshole with access to a gun in the United States of America. Only. https://t.co/XnLS5hBxK2