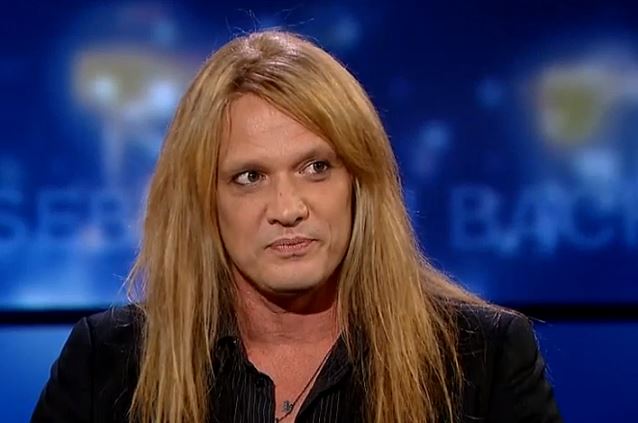 "Temptation", a brand new song from former SKID ROW singer Sebastian Bach, was premiered on the February 17 edition of "Mohr Stories", the podcast hosted by actor, comedian and sports enthusiast Jay Mohr. You can now listen to the podcast below. (Note: "Temptation" begins around the 50-minute mark.) It is also available on iTunes.

"Temptation" is taken from Bach's new solo album, "Give 'Em Hell", which will be released on April 22 via Frontiers Records. The follow-up to 2011's "Kicking & Screaming" was once again produced by Bob Marlette, who has previously worked with ROB ZOMBIE, BLACK SABBATH and SHINEDOWN, among others.

"Give 'Em Hell" was mastered at Precision Mastering in Los Angeles with Tom Baker. Bach said: "The CD Tom gave me today is EXACTLY what I want you all to hear when you press 'Play' on the new record.

"Tom has taken Bob Marlette's incredible mixes and retained all of the warmth and added sonic sparkle and excellence that I just cannot believe it when I listen to it.

"I want to thank Tom Baker and Bob Marlette and all of my bandmembers for all of their talent and expertise which is completely evident when you listen to this music.

"I truly feel like the luckiest man on earth right now.

"I truly love the CD and I just cannot wait for you all to crank the hell right out of it! It has been delivered to the presses and they are making one especially for YOU right at this very second!"