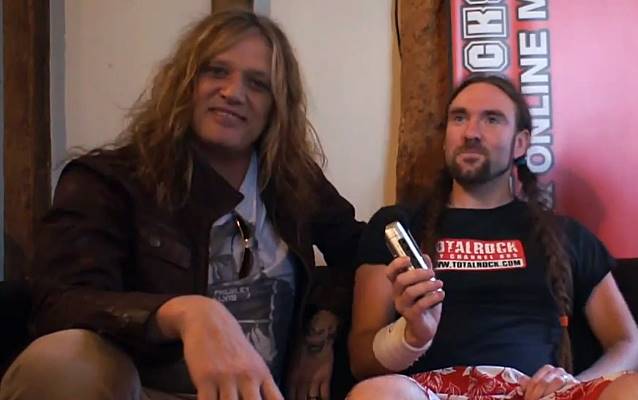 SEBASTIAN BACH: 'I Drank Every Night Of My Life For Probably 25 Years'

Former SKID ROW frontman Sebastian Bach says that he has stopped drinking alcohol because wants to be "in this for a long time" and "be the best" singer and performer that he can be. Speaking to MikeJamesRockShow.com at the U.K. edition of the Sonisphere festival, which was held July 4-6 at Knebworth Park in Hertfordshire, Bach said (see video below): "I know this is gonna come as a shock to the continent of Europe, but I don't drink anymore. Pretty fucking weird and crazy, isn't it? I'm not exactly straight-edge, but I don't drink alcohol. I might have a smoke once in awhile, but I don't drink."

"I drank every night of my life for probably 25 years — every fucking night. And I loved it. But you have to make a choice of whether you wanna be in this for a long time or not be your best. It's a very challenging environment. So I just wanna be the best I can be. That's pretty much it. I just feel physically better, and I look physically better. When I get fucked up every night, I look like pure hell, like anybody else does.

"I'm friends with guys like Duff McKagan from GUNS N' ROSES; we did many tours together. We [SKID ROW] opened up every show of the 'Use Your Illusion' tour, and we partied quite a bit [laughs], GUNS N' ROSES and SKID ROW. We had a good time. But now he is totally straight. I think his pancreas exploded or some crazy shit. When your pancreas explodes, maybe it's time to change your way of doing things. [laughs] 'Fuck, man, what a great time I had last night. I fucking exploded my pancreas. That's killer.' 'Wow, we really did it big time last night. I've got no fucking pancreas. [laughs] I forgot it at the party.' [laughs]

"But all joking aside, I don't know… I look up to people like Steven Tyler [AEROSMITH] — a guy that keeps screaming and keeps singing in his sixties. I mean, I was lucky enough to be born with this voice, and I will be singing in my sixties. If I live that long, I will be singing, because I'm almost that age. [laughs] So that's easy. [laughs]"

In a 2012 interview with "Friday Night Rocks", Bach revealed another reason he wanted to stay sober. "Even more heavy to me than other musicians [dying after battling alcoholism and drug addiction] and stuff, I've got this girl [his fiancée, model Minnie Gupta, that I'm so into… I'm six-foot-four — I'm a big dude — and she's like, 'Sebastian, you can't drink anymore.' I'm like, 'Why?' She goes, ''Cause you're so big, you're scary. You're in my face, spitting in my face, and your arms are all over the place and you're loud and I think you're gonna get in a fight or get hurt or get in a car crash or go to jail.' And she's like, 'You can either keep doing that, or you can be with me and not do that.' And I totally chose the latter."

Back in November 2010, Bach was charged assault, possession of marijuana and mischief after he allegedly bit the hand of a bartender trying to throw him out of Riley's Olde Towne Pub in Peterborough, Ontario, Canada.

A surveillance video posted on TMZ.com showed the singer smashing his wine glass on the ground morning and walking towards the entrance of the establishment after he was asked to the leave the bar due to his allegedly rowdy behavior.

A staff member reported Bach bit him on the hand while he was trying to restrain Bach until police arrived.

Bach was in Peterborough dealing with the estate of his father who had passed away.