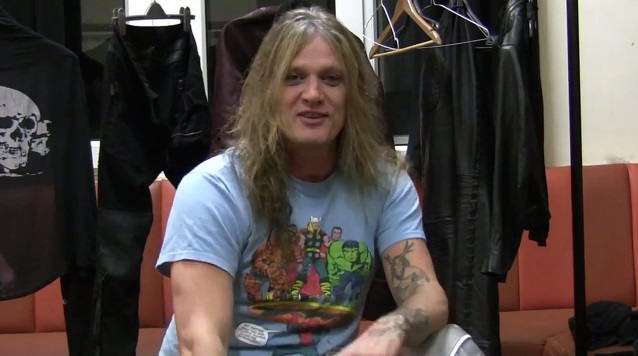 SEBASTIAN BACH: 'In The Mid-'90s, I Wasn't Trying To Sing Good Anymore'

GetYourRockOut conducted an interview with former SKID ROW singer Sebastian Bach after his July 7 concert in Manchester, England. You can now watch the chat below.

On how his singing style has evolved over the years:

Bach: "In the mid-'90s, I wasn't trying to sing good anymore, because the [popular] style of music [at the time] was, like, grunge and scream… This is, like, 1996, '97, '98… around there. I didn't think — and I was probably quite accurate — I didn't think people wanted to hear that high, clean, JOURNEY, 'I Remember You' style of vocals. So on my first solo album, 'Bring 'Em Bach Alive', it's hard for me to listen to, 'cause I'm not trying, because I was, kind of, shy, in those years, to sing the way I can sing. Then I did the Broadway shows, and each Broadway show was different — 'Jekyll & Hide' was the first one I did, then 'Rocky Horror', then 'Jesus Christ Superstar', and it was in 'Jesus Christ Superstar' when I had to hit these high screams that Ian Gillan from DEEP PURPLE hit on the first album. And it was really heavy, because I had to do it. So I was forced to learn again — this was year 2002 — how to really scream high. If you watch the movie 'Jesus Christ Superstar', listen to 'Gethsemane' and… What's the scene? The store scene, when he walks in and breaks the fucking store down and shit. The screams are like Rob Halford of JUDAS PRIEST. And I had to do it. And I trained my voice again to do that. And it felt… When I walked on the stage in rehearsal for that and I [started screaming], people fucking were just, like, 'What?' And it felt glorious. I [went], 'I'm never not gonna sing like this ever again,' 'cause it felt so cool to walk out there and do that. So then, my next solo album, 'Angel Down', and then 'Kicking & Screaming', and now 'Give 'Em Hell', they were all the style that I am known for. And the more I sing properly — like not overdoing my voice and concentrating on coming from a clean perspective when I'm singing — it gets fucking stronger and stronger and stronger. So that's what I've been doing."

On his next project:

Bach: "I have a book [on the way] on HarperCollins. It's coming out when it's done. And it's gonna be really focusing on the early years, the beginnings of SKID ROW, before we made it, and then how we made it. The feeling of not being famous and then being really famous. Being really poor and then being really not poor. Being unknown and then not being able to walk around. It's a story not many people can tell. [It will have] a lot of pictures. People like those old SKID ROW pictures. [There will be] lots of those in there. [laughs] I mean, we did the [MÖTLEY CRÜE] 'Dr. Feelgood' tour, we did AEROSMITH 'Pump', we did GUNS N' ROSES 'Use Your Illusion', we brought PANTERA on their first-ever tour of arenas in America. SOUNDGARDEN, NINE INCH NAILS, BON JOVI…Oh, I forgot BON JOVI… You know, when you're forgetting a BON JOVI tour, you've done a lot of touring. [laughs] 'Oh, yeah, that one!' [laughs] So thre's lots to write about. I'm, like, the only rock guy that doesn't have a book, right? I mean, you can go buy any book on any dude. So, here comes mine… I want it to be a positive, uplifting kind of story and not just the lowest common denominator. I read Duff McKagan's [GUNS N' ROSES] book and I thought it was so great. And also Paul Stanley's [KISS] book that he just put out, 'Face The Music', was incredible. And so I want my book to have a positive feeling to it."