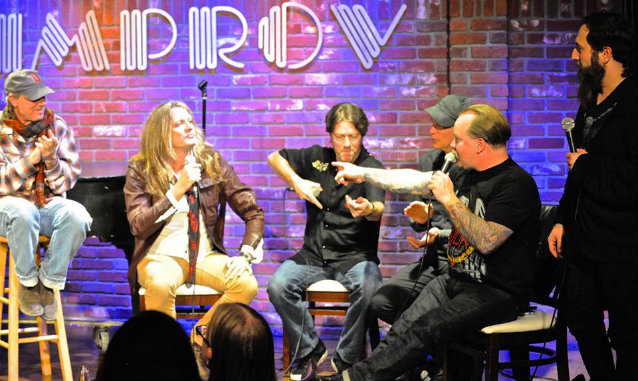 Former SKID ROW singer Sebastian Bach has set "Give 'Em Hell" as the title of his new solo album, tentateively due in March via Frontiers Records. The follow-up to 2011's "Kicking & Screaming" was once again produced by Bob Marlette, who has previously worked with ROB ZOMBIE, BLACK SABBATH and SHINEDOWN, among others.

Bach revealed the new CD title during an appearance on Episode 71 of the "Let There Be Talk" podcast with with rock and roll comedian Dean Delray. You can now listen to the episode, which was recorded last Thursday (January 9) at at the Hollywood Improv, using the audio player below.

The cover for "Give 'Em Hell" is once again being handled by Richard Villa, who worked on "Kicking & Screaming". Incorporated into the album design will be one of the paintings by Sebastian's late father David Bierk, who painted the artwork for SKID ROW's "Slave To The Grind", inside artwork for SKID ROW's "Subhuman Race", and Bach's solo albums "Angel Down" and "Bring 'Em Bach Alive!".

"Give 'Em Hell" was once again mastered at Precision Mastering in Los Angeles with Tom Baker.

Episode 71 of "Let There Be Talk" podcast (audio):