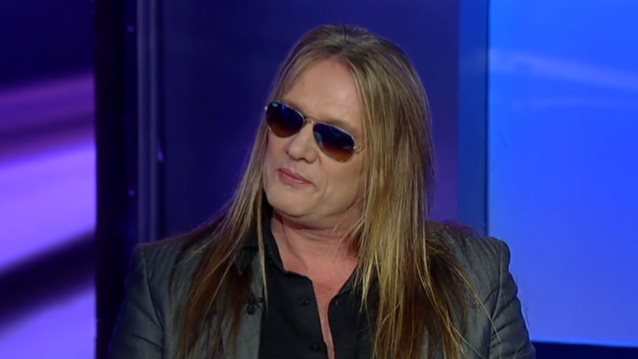 Former SKID ROW singer Sebastian Bach was interviewed earlier in the month on the Fox Business program "Kennedy", hosted by former MTV VJ Kennedy. You can now watch the segment below.

Asked if he ever thought that he wasn't going to survive the days of rock and roll debauchery and Sunset Strip excess of the late 1980s and early 1990s, Bach said: "When you're that age, you think you're indestructible. You don't really think it's bad for you. Back then, we didn't know that it was very bad for you. I remember vividly when the basketball player Len Bias died [in 1986] and it was a big news [story]… He just did a line and then he dropped dead. And we didn't know that was possible. But we found out that it's not only possible, but probable."

Bach also talked about how the rise of grunge in the early 1990s contributed to the decline of glam metal and party rock and roll. Asked when he realized that there was a "shift" taking place and how he felt about it, Bach said: "I think I realized it when I saw the video for [NIRVANA's] 'Smells Like Teen Spirit'. And there was never any video or song like that before; it was a new sound, and people were responding to it. But what goes around comes around. I mean, now the biggest tour in town is GUNS N' ROSES or AC/DC, who have the same singer. [Laughs] So, you know, music is cyclical, and people will always love rock and roll, 'cause it gets passed down through the generations. IRON MAIDEN has never been bigger than right now. It's kind of crazy."

Bach's autobiography, "18 And Life On Skid Row", came out on December 6 via Dey Street Books (formerly It Books),an imprint of HarperCollins Publishers.