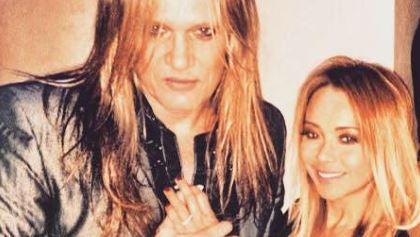 Le is model who is reportedly the mother of two children, including one fathered by Brett Harrelson, actor Woody Harrelson's brother.

Video footage of Bach and his fiancée talking to TMZ last night after exiting Madeo restaurant in Los Angeles can be seen below.

Speaking about the December 21 incident at his concert in Toronto, Ontario, Canada when he berated a concertgoer for apparently bumping into the singer's 70-year-old mother, Bach told TMZ: "[My mother was at the show] because she rocks hard. She shouldn't have been in the front, but that was 13 nights in a row, and when you do 13 nights in a row, things happen. I looked out in the crowd and some guy bumped into her, and I said, 'Don't mess with my mother.'"

Last night @ W Hollywood 4my fiance @Suzanne_Le s Birthday party it was a night we will never forget ? #Celebrationpic.twitter.com/LfdNNJpiL4