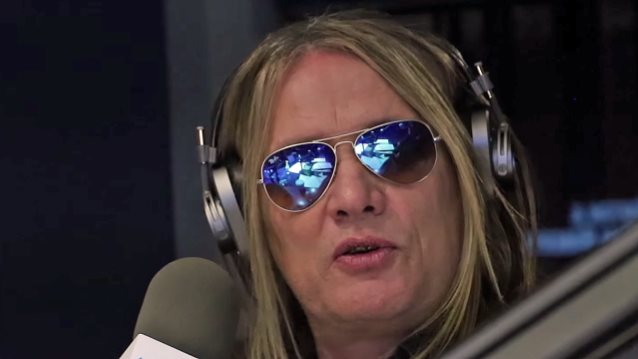 Sebastian Bach has reacted to his former bandmate Scotti Hill's recent comment that the "door is closed" on a reunion of SKID ROW's classic lineup.

During an appearance on the August 7 episode of "Another FN Podcast", Hill ruled out the possibility of a renewed collaboration with Bach, explaining he and his bandmates don't want to "put ourselves in a volatile situation and be unhappy and destroy what we have now."

After Hill's comments were published on BLABBERMOUTH.NET, Bach took to his Twitter to post what appears to be a relatively recent photo of him and Hill, along with their respective significant others, posing for the camera and smiling. He captioned the photo "Volatile Situation," clearly referencing the guitarist's remarks about the chances of a classic SKID ROW reunion.

In 1999, SKID ROW reformed and, after a bit of shuffling over the years, featured a lineup consisting of original bassist Rachel Bolan and guitarists Dave "Snake" Sabo and Hill, alongside drummer Rob Hammersmith and singer Johnny Solinger.

Hill told "Another FN Podcast" that while he understands fans' desire to see a SKID ROW classic-lineup reunion, he won't forsake his emotional well-being for a bigger paycheck.

Despite his reluctance to be in a group with Bach again, Hill said that he respected his former bandmate's abilities. "He's not a rock star, he's a superstar, man," the guitarist said. "He's great, dude. I totally realize what he is. I'll speak for myself: he is a guy… he'll cut his own throat to do a good show. He puts it all out there. He's a great singer and a great frontman — one of the all-time greats. But we're not working together. To replace a guy like that is… Well, yeah, you realize what you're up against. People are, like, 'They have no idea…' Yeah, we have an idea — of course we do. But that was the only way to do it. And the records he did with SKID ROW are great — he did a great job. And he was just such a huge part of that. But it just can't happen. Replacing a guy like that, yeah, it's hard, it's hard."

Bach has consistently expressed his desire to reunite with his former bandmates, telling Loudwire last year: "I don't have any reason why not to do that. I have no animosity towards anybody in SKID ROW, and the fact that we're all, five of us, still alive in this world is a pretty amazing feat. So I would someday definitely like to hear the five guys who made those records play live together again. Yes, I would. 'Cause I'm a fan too." He added: "I'm up for it, if they are."