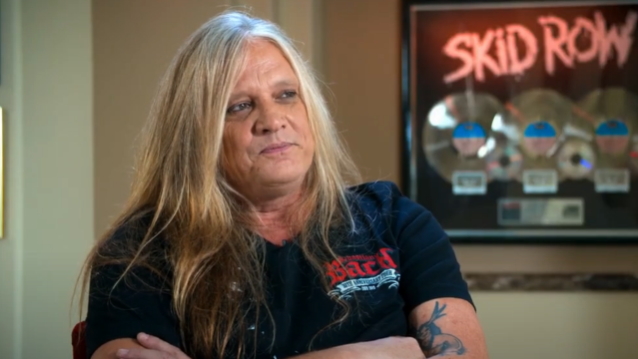 During an appearance on a recent episode of the "I Am All In With Scott Patterson" podcast, former SKID ROW singer Sebastian Bach spoke about his plans for the long-awaited follow-up to his latest solo album, 2014's "Give 'Em Hell". He said (as transcribed by BLABBERMOUTH.NET): "I have a new record label and we're putting out a new record very soon. I'm not supposed to talk about that, but I'm always working on new songs and new music."

Regarding what has taken him so long to get the new record ready for release, Bach said: "Basically, I kind of had to take this year off a little bit, because I — I'm not supposed to say this stuff — I've been working on music since two SKID ROW singers ago. [Laughs] I've been working on music since before the pandemic, so I have amassed a lot of music. And the thing about putting out music in 2022 is that you have to figure out a way to cut through the clutter, because everybody and their cousin puts out an album or has a YouTube page. A long time ago, there used to be record companies that you had to be good to get signed. Not just anybody could put out records; it was a privilege, and you had to work for it. But with the advent or Pro Tools and technology, you can be a wrestler and then just wake up the next day and go, 'I'm gonna be a rocker.' … And then you just walk in there and waffle out some half-ass take and then fix it up on a laptop. So with there being no gatekeepers, you've got to have a plan. And if noticed, albums that are big now, they have such a long setup time. An artist will put out three or four songs, or three or four videos even before the album comes out. So it's this big plan. And there's also the vinyl backlog. You have to get in line to produce vinyl right now, because vinyl is so hot — everybody collects it — that you have to have six months lead time even to get into the vinyl pressing plants.

"So, that's very boring, but that's what's happening," he added. "We are amassing the plan."

Less than two years ago, Sebastian told The Aquarian Weekly that he was working on a new album but he declined to name the record company that will be putting it out. "Yes, I have a new American label and I have been working somewhat on the album during this damned quarantine," he said. "But there is only so much I can do in my house. I have been sending files back and forth [to my bandmates], but it is not as exciting as being together in the same room. Maybe Taylor Swift lives with her whole band. I don’t know how that works."

Bach hasn't released a full-length disc since "Give 'Em Hell", which came out in March 2014. Like its predecessor, 2011's "Kicking & Screaming", the disc was released through Frontiers Music Srl, the Italian label which specializes in what's commonly called AOR, a term that once signified a popular radio format ("album-oriented rock") but nowadays applies to acts whose airplay is marginal.

Although Bach had said in some of his interviews a few years ago that his next record would be less musically aggressive and it would be "more uplifting and fun," he told WRIF that he has since had a change of heart.

"Well, before [the new record deal] happened, I was thinking of doing more of an acoustic-based record because I've done a lot of solo records," he said. "I've done 'Angel Down', which I'm very proud of that album,. Then 'Kicking & Screaming', which is a great album. 'Give 'Em Hell'… Not to mention 'ABachalypse Now', which is a three-record set. 'Forever Wild' DVD, 'Bring 'Em Bach Alive!'… I've put out a lot of records. And putting out the last one, when I put so much time and effort into it and it doesn't get the attention that it deserves, for me as an artist, I'm, like, 'Fuck!' So I was, like, you know what? If I'm gonna put out another heavy metal, hard rock album, I need help. I need a company around me that's gonna put the same kind of attention and time and effort into it as I am. So now that looks like it's happening. So now I'm changing the way I'm looking at things."