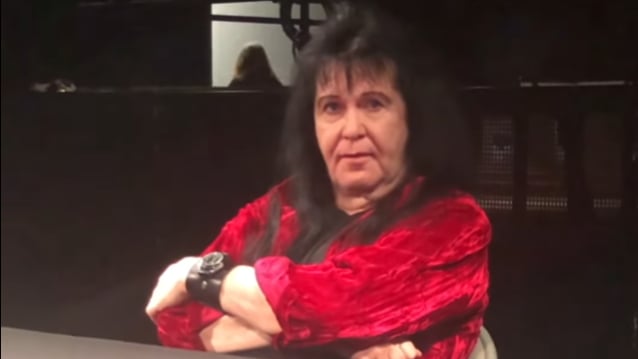 During a "VIP Experience" question-and-answer session before W.A.S.P.'s November 27 concert in Charlotte, North Carolina, frontman Blackie Lawless opened up about his faith and what the catalyst was for him rededicating his life to Christ. He said in part (as transcribed by BLABBERMOUTH.NET): "One day some of the folks you used to know just don't come around anymore. But that's not why you make those kind of decisions. You have to do what's right for you. And I've told people that for me it was kind of like the Lieutenant Dan moment [referring to Gary Sinise's character Lt. Dan Taylor in the movie 'Forrest Gump'], where Gary Sinise is sitting up in the crow's nest [of his shrimp boat in the middle of a hurricane], and he's shaking his fist at God: 'You'll never sink this boat.' Well, I went through one of those. And I spent six months studying the New Testament, trying to disprove it.

"You've gotta remember that I was brought up in the church," he explained. "I had an uncle who was a preacher, and my dad was a Sunday school superintendent. My grandfather was a deacon. So when the doors were open, I was there. So I grew up with all that. But I went away for 20 years and I came back, and, like I said, that's when I decided I was gonna have the face-off. It's like trying to determine, is this or is this not real? So it wasn't like a big… I made the Gary Sinise joke just a second ago. But it really wasn't one of those. It was more like a process of evaluation and studying and things like that."

Blackie previously spoke about his faith while discussing how being a born-again Christian affected the overall creative and recording process of the band's then-new album, "Golgotha". He told Ultimate Classic Rock at the time: "Certainly, lyrically everything is written from the eyes of my faith, everything is through that filter. You're also talking about a genre [heavy metal and hard rock] that, in general, is obsessed with the idea of God and/or the devil. Jazz, pop, there is no other genre that is absolutely obsessed with it as this genre is.

"The Bible tells us, 'The truth has been placed in the hearts of all men.' In other words, people know what the truth is. What I see is people in the search of the truth. They're all on a journey, the people that are attracted to this genre are people who are really a lot more in tune with it than they think they are."

He continued: "I'm speaking from a direction where I know what I'm talking about. I was in the church until I was in my late teens, and when I left and came to California, I went as far away as you could possibly go. I ended up studying the occult for three years. I understand what they're looking for — they're looking for the same thing I'm looking for. I'm at a point now where I'm bilingual: I can speak their language. They can't necessarily speak my language, but I can understand where they're coming from.

"When we say 'religion,' we kind of use that as a general term, and when people have the resistance that they have to it, they have every reason to feel that way. That's part of what drove me away — the indoctrination of men that I received; it's man's indoctrination. Now, from my perspective, my faith is based on Jesus Christ and the Bible — nothing more, nothing less.

"I don't want to hear anybody telling me their ideas or their interpretations or interjections of what they've put into the Bible, like telling me I can't eat meat on Friday, or I got to go and worship somebody's old dead bones somewhere. That's not in my Bible. There's a lot of it. Every organized religion has it, every organized faith has it. That's not where I'm coming from."

Blackie went on to say: "When I left the church and then I studied the occult, I walked around for 20 years and thought I was mad at God. I realized after 20 years I was not mad at God, I was mad at man for that indoctrination I received. For me I had to settle this issue once and for all, because I am not going to walk around with this anxiety of what's going to happen to me and where I'm going. I got to know the truth. I got the Bible and I started reading and I thought I was going to disprove this thing once and for all.

"Everyone says the Bible is written by men, but the Bible says it was men who were directly inspired by God. But I didn't believe it for a minute. So I start reading and I start discovering and you have 66 books written by 40 different authors spread over three different continents, in three different languages, over a 2,000-year period. Most of the authors did not know each other, had no knowledge of each other, but yet I see consistently that they're not just answering each other's questions, they're finishing each other's sentences. It was mind-boggling, the deeper I got into it, and one day it hit me like a shot. I'm reading the living word of a living God. After that, I was just scratching the surface. Then, when you get even deeper into it, it's beyond comprehension.

"I cannot say it strongly enough. It is beyond impossible that it could've been written by men. I'm a writer, and even the writers that I know that I admire, I look at how we write, I know what our limitations are, and, like I said, it's so far beyond our comprehension."

W.A.S.P. kicked off its first U.S. tour in a decade in October. The trek coincides with the band's 40th anniversary and includes support from ARMORED SAINT and MICHAEL SCHENKER on select shows.