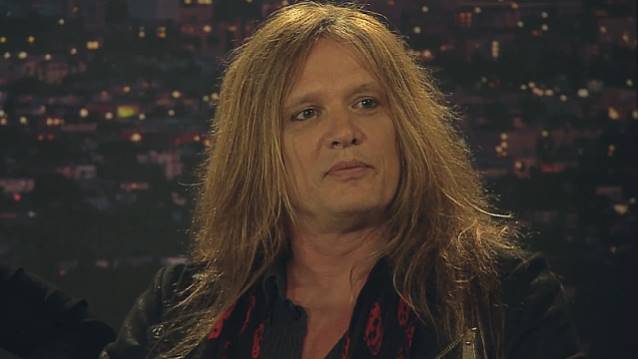 Ex-SKID ROW singer Sebastian Bach has responded to a recent interview in which SKID ROW bassist Rachel Bolan told a journalist that answering questions about the possibility of working with Bach again is "a waste of time."

"I go on my Twitter feed and I read things like [January 24] was the 25th anniversary of the release date of the first SKID ROW album, and SKID ROW doesn't give a fuck," Bach tells Yahoo! Music. "I would love to do something to celebrate it, and my former bandmates are like, 'Nah, we're playing a bowling alley. We're happy. We don't care.'"

He adds: "There's a lot of unreleased material sitting around collecting dust. The fans would love [to see it being released], but I guess my band is allergic to cash. They're happy not being big. It's such an insult to the millions of people who dug our albums. It's like saying, 'We were just joking [back then]. Happy anniversary!'"

Bach said he wanted to write the letter in response to current SKID ROW singer Johnny Solinger's interview in which Johnny said a tweet by Bach about a possible SKID ROW reunion was an attempt to "get attention."

Speaking to SCTimes.com, Bolan stated about Sebastian's departure from SKID ROW, "We thought we were disbanded and that we'd never do it again. Then we kept getting e-mails and the management office was getting lots of letters about people wanting to see SKID ROW on stage and we really started to miss it. We knew if we got back together, we were going to do things different."

He added, "When Johnny joined the band [in 1999], that really gave us a kick in the ass. It was a different guy there and everything that came out of that guy was positive."

On the topic of the persistent rumors of a reunion with Sebastian, Bolan said, "Actually, there were never any talks. Ever. That was all just total rumor. We got rid of him in the '90s and never looked back. . . After the first tour [with Solinger on vocals], it seemed like this is the way it's always been. It's so weird, I'll hear an old song on the radio and it just sounds so bizarre to me because I'm so used to Johnny singing it."