Sebastian Bach has traded verbal jabs with a writer over a negative review of the former SKID ROW singer's recent concert in Georgia, calling the critic a "complete loser" and telling him to "stay the fuck away from me if you know what's good for you."

Bach kicked off his "An Evening With…" U.S. tour on April 27 in Jacksonville, Florida. The trek sees the singer changing up the set he has performed for years by going for a more "stripped down" approach.

Don De Leaumont attended the second show of Bach's tour — which took place on April 28 show at 37 Main in Johns Creek — and posted a review of the gig on The Great Southern Brainfart web site. In the article, which can be read in its entirety at this location, he described Bach's vocals as "so off key that I was waiting for Randy Jackson to come out saying, 'Yo dawg, that was a little pitchy.'" The writer went on to say: "It was really painful to see how this guy who at one time was one of my favorite metal singers in one of my favorite metal bands reduced down to such a circus side show. Even his band for the most part all had this look of disdain on their faces like they were barely happy to be even picking up a pay check from this gig."

After De Leaumont posted a link to his review on the The Great Southern BrainfartFacebook page, Bach personally responded in the comments section, calling the author of the article an "asshole" and adding, "Stay the fuck away from me if you know what's good for you." The singer went on to say: "I will tell every band I know to keep you off the fucking list of every show that you ever want to get into." De Leaumont and Bach then exchanged a number of insults in the comments below the writer's original post, with De Leaumont telling Sebastian: "I'm sorry dude but I was a fan. A HUGE fan. I've always gone to bat for 'Slave To The Grind' and defended that era of SKID ROW but man, let's face it. You don't have it anymore. You rely on vocal effects (very obvious) and your a pretentious douchebag. The truth hurts obviously." Using what appears to be his personal Facebook account — under his real name, Sebastian Bierk — Bach responded to De Leaumont, saying: "Yeah that was the reaction from the video clip of 'My Michelle' that I did on stage with Axl Rose last week. That I've lost my voice. Go fuck yourself. I will post video from this exact show you were at and you will look like the complete loser that you are."

Sebastian's "An Evening With…" tour is scheduled to end on June 3 in Salt Lake City, Utah. Bach will follow the trek with the release of his long-awaited memoir, "18 And Life On Skid Row", due out June 28 on Dey Street Books (formerly It Books),an imprint of HarperCollins Publishers. 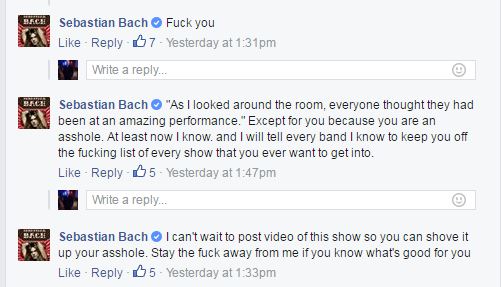 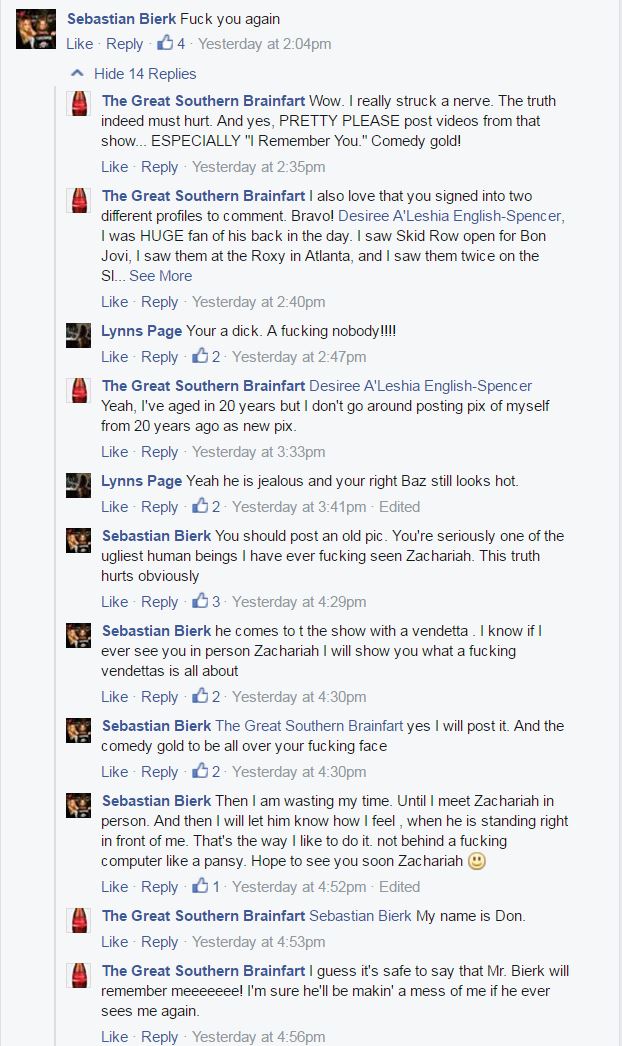