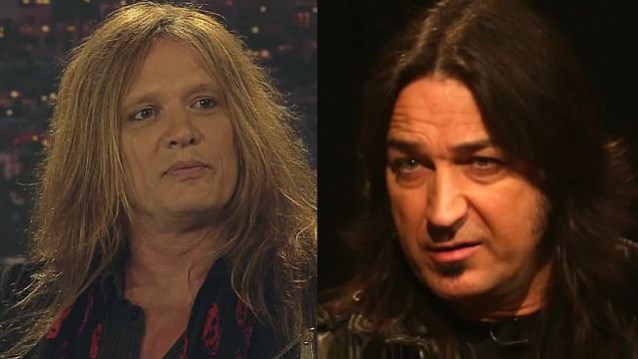 The feud between the former SKID ROW singer and STRYPER frontman Michael Sweet began in November 2016 when Sweet shared a video on Facebook of 16-year-old emerging artist Moriah Formica perfoming the SKID ROW track "I Remember You", along with the caption: "Moriah Formica kills this and in my humble opinion, smokes the original singer." He also proceeded to call Bach a "tool" in the comments section after being questioned about the caption by a fan.

After being alerted to Sweet's post by a fan, Sebastian fired back, writing in a tweet: "Michael Sweet has a big fucking mouth. Behind a keyboard that is. Can't wait to see this pussy in person again someday."

While speaking to "The Blairing Out With Eric Blair Show" at last Friday's (October 6) "Bowl For Ronnie" event in Studio City, California, Bach was asked about his war or words with Sweet. He said (see video below): "All I know is that when I see a headline on Blabbermouth and it says, 'Bach Slams 'Pussy' Sweet,' you've just kind of gotta do a double take on that one."

Pressed about whether he likes Sweet on a personal level, Sebastian said: "I don't, actually. I think STRYPER sucks. I've always thought that — since I was a little kid. I think their songs suck, I think their fucking clothes suck. Should I go on? What are they gonna [do] — whip a Bible at me? [Laughs]"

After clarifying that his opinion of STRYPER doesn't have anything to do with the Christian messages in the band's lyrics, Bach said: "I think they just make bad records. And I don't think they ever did make good records."

Sweet last November released a statement in response to Bach's "pussy" comment, saying that "anyone who knows me knows that I express my opinion and I'm more than willing to back it up. I do my best to be honest yet not to be mean-spirited or destructive. I'm also no pussy. Obviously, Sebastian doesn't know me, because if he did, he'd know that as fact."

He added: "Unfortunately, I think because I'm a Christian, some people think that I'm supposed to 'turn the other cheek' and let people say and do whatever they want. I guess the 'pussy' in me won't let me do that."

Formica is featured on Sweet's latest solo album "One Sided War", singing a duet with Michael on a different version of the song "Can't Take This Life".

Sebastian and Michael previously traded barbs nearly three years ago when the STRYPER leader claimed he was asked to produce a Bach solo album, only for those plans to be squashed because Sebastian couldn't make up his mind. Sweet said: "I was approached to do a Sebastian album… to produce it and to co-write with him and basically try to kind of go back to those powerful songs from the past. Not make a dated record, but just that style, the anthemy SKID ROW stuff that everybody loves. And that was the plan."

Michael also offered a theory as to why so few of Bach's eight hundred thousand Facebook followers purchased the former SKID ROW singer's latest solo album, "Give 'Em Hell", when it was first released. Sweet said: "This isn't a bash against Sebastian at all; it's just my opinion. I think people wanna hear Sebastian of old. They wanna hear the SKID ROW Sebastian. They wanna hear the hits. And he's giving them modern rock. It's ['Give 'Em Hell'] a good album, it's a good-sounding album, but it's not the glory days."

After a fan wrote on Twitter that "the points M. Sweet made about fans wanting 'old school' Bach sounds - are ACCURATE. Not rude or mean. Just true," Bach responded: "ACCURATE? FACT: No member of STRYPER was EVER asked to produce ANY album by Sebastian Bach! EVER. Who do U think asks that?? Omg!"

Sweet later took to his own Twitter to clarify his proposed role in the making of Bach's solo album. Michael wrote: "I was asked by the LABEL to produce Sebastian Bach. I never said by Sebastian."