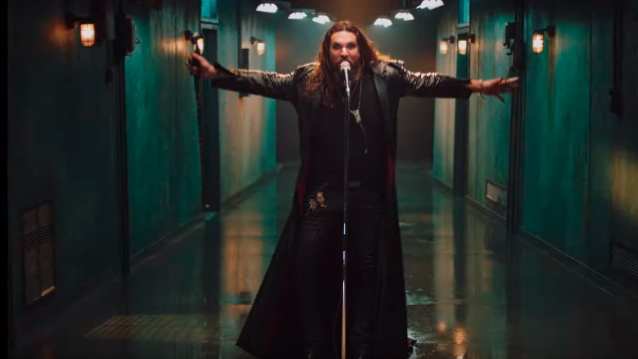 Ozzy Osbourne has released a teaser video for his new song "Scary Little Green Men". The one-minute clip, which can be seen below, features Jason Momoa, the hulking star of the superhero film "Aquaman", playing the role of Ozzy, standing at the mic and singing along to the song's lyrics.

The Hawaiian-born actor, who is perhaps best-known for his role as Khal Drogo in HBO fantasy epic "Game Of Thrones", is a huge heavy metal fan, having previously said that he listened to a lot of PANTERA, METALLICA and MUDVAYNE to get himself into the right frame of mind for playing a warrior like Conan in Marcus Nispel's remake of the classic Arnold Schwarzenegger action adventure "Conan The Barbarian". More recently, he tapped vocalist Oli Peters of the Canadian death metal band ARCHSPIRE to coach him on how to mimic his distinct vocal style for the early troop rallying scene in the Apple TV+ sci-fi series "See".

"It was a lot of fun to do though it's a lot different from my other albums," Ozzy said. "We recorded it quickly, which I haven't done since the first BLACK SABBATH album. This made it a different process, which I actually enjoyed."

Beyond the core band, "Ordinary Man" features a who's-who of Ozzy friends and collaborators including Elton John and Tom Morello.

"It all just came together," Ozzy explains of the guest stars. "Slash is a dear friend of mine, as is Elton. When I was writing 'Ordinary Man', it reminded me of an old Elton song and I said to Sharon, 'I wonder if he would sing on it?' We asked, and lo and behold, he agreed and sings and play piano on the song."

"Ordinary Man" will be available as a standard CD, deluxe CD, black vinyl, deluxe gatefold swirl color vinyl, picture disc and digital album. In addition, all physical copies of the album will include a unique code that will allow the purchaser to enter a sweepstakes for a chance to win one of over 300 Ozzy prizes.

Ozzy is that you?

With OZZY’s highly-anticipated ORDINARY MAN (@Epic_Records) out tomorrow (Feb 21),he has shared a special clip in advance of the release. But who is the man under the cloak?!https://t.co/JRkXuzWRIK