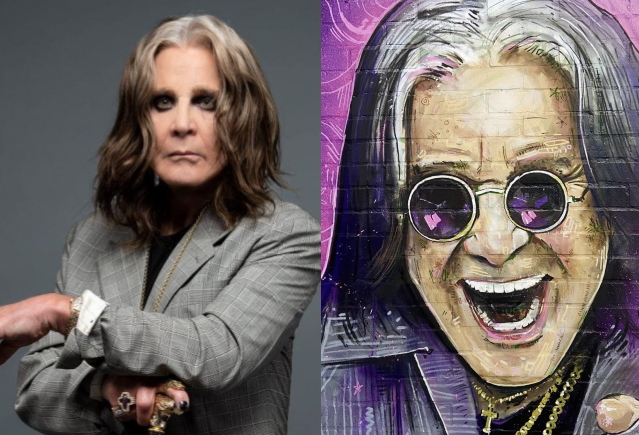 According to Birmingham Mail, artist Robbie Jeffcott spent fifteen hours drawing a portrait of Ozzy Osbourne which has recently been completed at the Custard Factory, a creative and digital business workspace complex, including independent shops, cafes and bars, on the site of what was the Bird's Custard factory off High Street, Deritend, in the Digbeth area of central Birmingham, England.

Robbie spoke about why he chose to paint an Ozzy mural, saying: "I only really paint people I admire. He's (Ozzy) just a living legend, probably the most well-known iconic musician to come from Birmingham.

"Having people walk past it and do little snaps to tag me on Instagram, it's good for me. I've only had good feedback from it."

More than three years ago, Ozzy spoke of his pride in Birmingham, saying he never tried to escape his Birmingham roots.

He said: "Well, whatever people think about me — and I don't get the chance to go and see Birmingham very often — I've never ever tried to hide my accent, and I've never denied that I'm from Birmingham.

"I'm absolutely so proud with what I've done with my life, it's unbelievable. Just hold on to your dreams, because you know what? Every once in a while they come true."

He added: "I am just a guy from Birmingham who's been blessed to have had such dedicated fans throughout my career."

Posted by Dogmeister, photos for your walls on Sunday, November 13, 2022