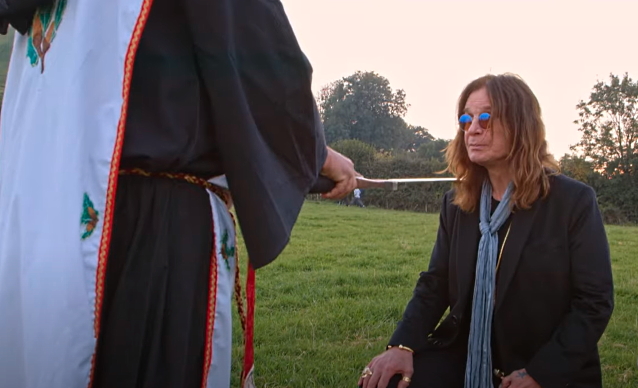 See OZZY OSBOURNE Get 'Knighted' With Help Of 'KING ARTHUR'

A newly released AXS TV clip from "Ozzy & Jack's World Detour" in which Ozzy Osbourne gets "knighted" with the help of "King Arthur" at Glastonbury Abbey, England can be seen below.

"Ozzy & Jack's World Detour" follows father and son duo — and heavy metal royalty — Ozzy and Jack Osbourne on the trip of a lifetime, as they embark across the United States and around the world. Armed with nothing but an RV and a bucket list packed with iconic sites and unforgettable activities, the pair hit the road to learn the history of legendary landmarks with the help of knowledgeable experts, and explore quirky local hotspots ranging from a funeral museum and medical oddities collection, to an abandoned penitentiary, a Sin City summit with Billy Idol, a dip in the Fountain Of Youth, and much more. The series also features appearances by Ozzy's daughter, Kelly Osbourne, and his beloved grandchildren, adding to the fun and humor associated with this well-known TV family.

Highlights include a trip to The Alamo, where Ozzy relives one of his more infamous moments; a trek to Roswell, New Mexico and the alleged extraterrestrial crash site just outside of Area 51; international odysseys to the U.K., where the pair checks out Superhenge; Japan, where they craft a kitana blade and Jack gets a souvenir that will last a lifetime; and Cuba, where Jack and Ozzy visit Ernest Hemingway's estate and try to score some Cuban cigars; as well as a visit to Mar-a-Lago; a high-speed chase down a NASCAR track; a cruise aboard a life-size Noah's Ark replica; a New Orleans excursion headlined by a tour of one of the country's most haunted houses; a Missouri mining adventure; and an out-of-this-world Space Camp retreat, among others.

"'Ozzy & Jack's World Detour' is the perfect summer series, packed with fun, adventure, and some truly incredible sights," said Sarah Weidman, head of original programming, development and multi-platform content for AXS TV. "We're excited to be able to provide our viewers with unique programming that celebrates the celebrity lifestyle, taking fans beyond the stage and into the personal lives of some of their favorite entertainers, as we show them a side of these larger-than-life figures that few ever get to see. 'Ozzy & Jack's World Detour' complements this mission exactly, allowing viewers to get to know Ozzy on a much deeper level as a devoted father and grandfather, and passionate history buff. Though travel may be limited right now, viewers can still enjoy jet-setting along with heavy metal's first family as they explore legendary landmarks and undiscovered gems — across the country and around the world."