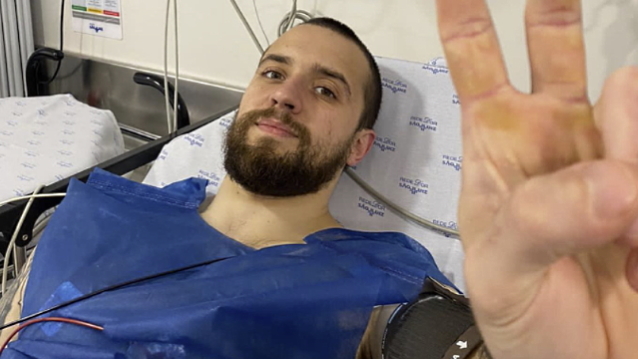 SEPULTURA drummer Eloy Casagrande, who recently underwent surgery after breaking his right leg in a stage accident, was hospitalized again earlier this week with a kidney infection.

On Friday (April 22),the 31-year-old Brazilian musician took to his Instagram to share a few photos from the hospital in São Paulo, and he included the following message: "Yesterday I was in a physical therapy session and I had a sudden pain in my abdomen. I had to rush to the hospital. I was diagnosed with a kidney infection (pyelonephritis) due to a stone that blocked the Ureter (the tube that carries urine from the kidney to the bladder). I had to go into an emergency surgery to have a 'double J' inserted between the bladder and kidney to unclog the canal. The calculus is still there, but it is necessary to deflate the kidney first and then resolve the stone issue.

"More than a special thanks to @zecabaldocchifisio who took me to the hospital while I was screaming in pain. Thanks to my wife @garciaariane_ who is with me every second, love you Peca. Thank you doctor @dr.gustavo_urologia who promptly volunteered to do the surgery. I greatly appreciate the assistance of @dr.marcosviniciuscredidio and @draerikasimplicio

"I'm already at home to continue with the physiotherapy for my leg. I'm fighting to be back as soon as possible. I ask for your support."

On April 4, Eloy explained in a social media post that he fractured his tibia and fibula bones after falling off stage "during the break between songs" at SEPULTURA's concert the previous night in El Paso, Texas. He also announced that he was "going back to Brazil to start the recovery."

SEPULTURA's "North American Quadra" 2022 tour with SACRED REICH and CROWBAR kicked off on March 4 in Sacramento and concluded on April 8 in Berkeley, California. The band's six-date tour of Mexico, which was scheduled for April 12-17, was postponed following Eloy's leg injury.

Casagrande joined SEPULTURA 10 years ago as the replacement for Jean Dolabella.