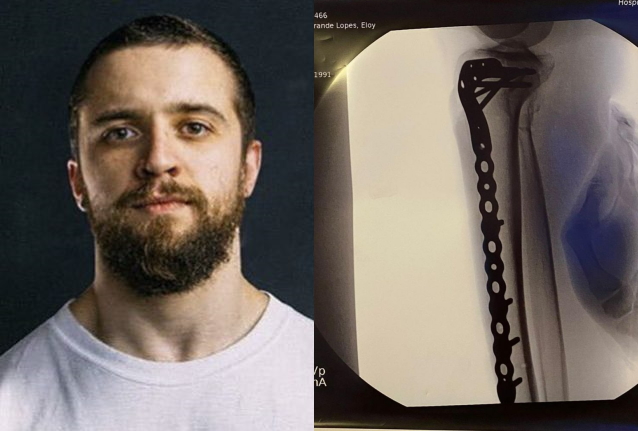 SEPULTURA drummer Eloy Casagrande has undergone a successful surgery after breaking his right leg in a stage accident less than a week ago.

On Friday night (April 8),the 31-year-old Brazilian musician took to his Instagram to share a couple of post-surgery X-ray photos from Hospital Do Coração in his home country, and he included the following message: "I'm writing here to let you know that I just had a surgery. It was a success! I can't thank you enough for the support and all the messages you guys sent wishing me a speedy recovery. You all give me the courage to continue. I'll be back! Very Soon!!! Thank you so much, @dr.marcosviniciuscredidio !!!"

Eloy first shared the news of his injury on Monday (April 4),explaining that he fractured his tibia and fibula bones after falling off stage "during the break between songs" at SEPULTURA's concert the previous night in El Paso, Texas. He also announced that he was "going back to Brazil to start the recovery."

SEPULTURA's "North American Quadra" 2022 tour with SACRED REICH and CROWBAR kicked off on March 4 in Sacramento and concluded on April 8 in Berkeley, California. The band's six-date tour of Mexico, which was scheduled for April 12-17, has been postponed following Eloy's leg injury.

Casagrande joined SEPULTURA 10 years ago as the replacement for Jean Dolabella.