On Sunday, May 21, Brazilian/American metallers SEPULTURA celebrated the world premiere of their documentary, "Sepultura Endurance", at the Regent theater in Los Angeles. A screening of the film was followed by a question-and-answer session with the band, as well as the "Sepultura Endurance" director Otavio Juliano.

You can now watch video footage of the discussion below.

"Sepultura Endurance" shows the journey from SEPULTURA's humble rural beginnings to decades spent on the international stage, giving an in-depth look into how the band continues to thrive in a changing metal landscape. Crammed full of rare archival footage, and featuring interviews with legends like Lars Ulrich (METALLICA) and Scott Ian (ANTHRAX),and younger artists influenced by SEPULTURA, like SLIPKNOT's Corey Taylor, "Sepultura Endurance" is the definitive document of the band's myths, struggles and heart.

"I'm very happy and excited that the SEPULTURA movie is finally done," comments SEPULTURA guitarist Andreas Kisser. "It is an amazing achievement from the director Otavio Juliano and the producer Luciana Ferraz from the Interface Films. Otavio followed the band on the road, on the studio and collected amazing statements from many people who are or were a part of this fantastic history. 'Sepultura Endurance' shows a story of this Brazilian band who conquered the world, suffered the ups and downs of a unique career that are still going strong. He filmed the historical show we did in Sao Paulo in 2015 for the celebrations of the 30th-year-anniversary tour and that's the central line of the whole history, our music! Through the music, we tell this story. We invite you to enter this time machine and explore the SepulHistory with no dramas or sensationalism."

"Sepultura Endurance" director Otavio Juliano states: "I had been filming the band SEPULTURA for the better part of 2010-2016, a time of tension and triumph for the band celebrating 30 years. Nothing has been off limits. The band gave me complete access, every door was open, I was never asked to leave.

"'Endurance' is an honest portrait of SEPULTURA: part concert film, part testimonial to the power of music, part intimate insider hang and great archival footage. Ultimately, the film is a testament to the endurance required to make a documentary for almost seven years, taking itself 800 hours of footage to complete. When you're filming cinema verite style, you're following the story as it's unfolding and you don't know the destination. 'Sepultura Endurance' has been a great journey."

Igor Kupstas of O2 Play comments: "This has been a passion project for Interface and it sure is a passion project for us at O2 Play. We are not only proud worldwide distributors of this amazing film but also metal fans, proud of SEPULTURA's work for the last 30 years. We are extremely happy with this partnership with Alamo Drafthouse Cinema and the Regent theater and to release 'Sepultura Endurance' first in Los Angeles, land of cinema and rock and roll, is a great honor. O2 Play is a Brazilian distribution company with a global approach, and, as part of O2 Filmes (production company of 'City Of God') we want to bring more and more of our culture to the theaters and platforms abroad." 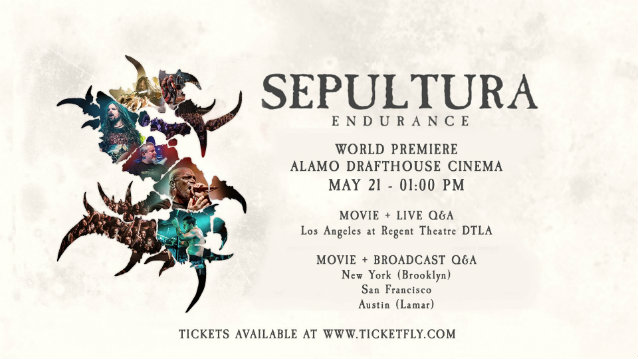