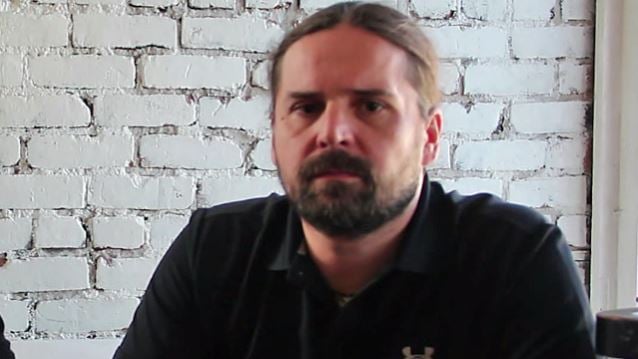 SEPULTURA's ANDREAS KISSER: 'Most Of America' Saw Us As 'Bad Guys' In MAX CAVALERA Split

Jimmy Cabbs recently conducted an interview with guitarist Andreas Kisser of Brazilian/American metallers SEPULTURA. You can now watch the chat in two parts below.

Asked how he would explain the fact that SEPULTURA still doesn't get the recognition it deserves from the American audiences like it does in other parts of the world, Kisser said: "Since [guitarist/vocalist] Max [Cavalera] left the band [in 1996], SEPULTURA has been attacked, in the sense that it was [presented] to the press, and Roadrunner, our record label at the time, really helped to create that image — that Max was the victim, that SEPULTURA did somehow put him out because of whatever reasons and stuff. But we only fired our manager. And he was married with our manager, so he left the band. We didn't fire him. And they started creating this image that we were the bad guys, and America kind of bought that — most of America, I should say. I cannot really generalize, because we have great fans here as well that can really feel and see the evolution of the topics that we're talking about and our musical experiences, not only in Brazil, but going different ways, not trying to copy ourselves, and really keep the SEPULTURA spirit alive that is keeping us together."

He continued: "Even with the Cavaleras [Max and his brother Igor, who left SEPULTURA in 2006] in the band, we never did the same album; we always tried to do something different. Even 'Chaos A.D.', which is one of the most special albums in our career, we [followed it up with] 'Roots', which is totally different from it. Usually a band finds a formula and tries to repeat [it], but we never did that. And Max tried to repeat a lot 'Roots' and stuff, and talking to the press, and this and that. And not only in the media, but backstage, behind the business, and making campaigns against [us]. And, anyway… We didn't lose only the singer — we lost our management, we lost the trust from the label, we lost the trust from many promoters and booking agents and stuff. So we really had to rebuild everything, you know. But I think America is a difficult place to tour as well, you know, playing metal and stuff, so we were much more in Europe and South America and different places than here, you know, so that helped [create a] distance with the American crowd and fans."

Kisser added: "But, you know, it's a challenge… America was a challenge, and always was a challenge for SEPULTURA. We never did a headlining tour here in the same way we did in Europe, for instance — playing arenas. We opened for Ozzy [Osbourne] here, we opened for PANTERA, we opened for MINISTRY, we did Ozzfest, and great shows like that, but never a SEPULTURA [headlining] tour like that. So, when we were ready to do that on the 'Roots' tour — in 1997, we were ready to come to America and really establish SEPULTURA as a great act — but Max left at the worst moment. So the consuequences were really hard for us and stuff. But nowadays, looking back, I have to thank everything that happened to us. Because we are a much better band now. We control a lot more our life, our business. We are older, we have family, kids… We are more experienced to deal with different things, and we enjoy ourselves. I think that's the most important thing. And too bad for the people who don't follow SEPULTURA [anymore]. It's their problem, actually.

"I'm not here to convince or preach to anyone. I just express myself through my guitar and lyrics, etc. And we've got connections with different cultures, different crowds, different countries…. 73 countries SEPULTURA visited in these thirty years. It's an amazing mark — an amazing mark. It's insane to see that, regardless of politics and religion, we go everywhere and the music really opens the door.

"It's a privilege to be a part of SEPULTURA, and we just need to work more in America.

"I just tell them — the people who denied SEPULTURA with this or that — to give [it] a chance and come to the show and see and enjoy the music. We have nothing more than to offer than our music, and I think that's the beauty of it all. We're not here to cheat anyone or try to create images; we just like to play our music honestly and have that connection with the crowd. That's it."

SEPULTURA's North American tour with DESTRUCTION and ARSIS kicked off in Phoenix, Arizona on May 10 and ended on June 14 in Grand Junction, Colorado.

SEPULTURA was joined by legendary guitarist Steve Vai on stage during the band's May 9 performance at the Rock In Rio USA festival in Las Vegas, Nevada.

The band's latest album, "The Mediator Between Head And Hands Must Be The Heart", came out on October 29, 2013 via Nuclear Blast.