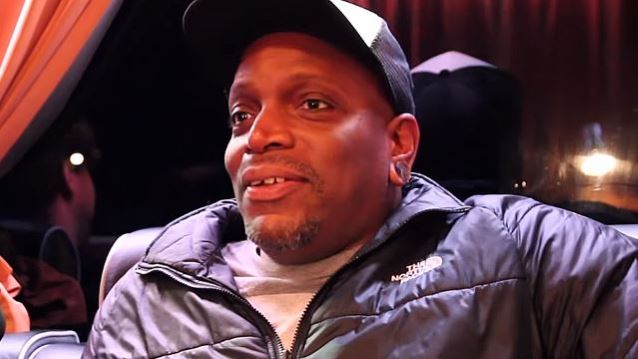 Stay Tuned Interviews conducted an interview with vocalist Derrick Green of Brazilian/American metallers SEPULTURA on November 19 in Bristol, England. You can now watch the chat below. A couple of excerpts follow (transcribed by BLABBERMOUTH.NET).

On whether it ever gets easier to come up with new riffs and lyrical ideas:

On whether he can see himself touring around the world for the rest of his life:

Green: "Not at the pace that we're doing it now, because we're usually doing six shows a week, sometimes fourteen shows back to back. I find that very difficult. I think everybody finds that very difficult in the band. I think less shows, more time off in between, I could see doing it for a much longer time. It takes a lot [out of] your body. It's really physical — to be on stage, to be traveling on a bus, sitting in airplane seats, traveling at crazy hours of the night, being away from family and friends. So I think it would have to be spread out more, but I don't see why it would be impossible to keep doing this and doing this. But forever? It's a long time. [Laughs]"

On how a musician is supposed to retire:

Green: "I don't know. It's a good question. I can't imagine retiring anytime soon. But I love music. I mean, I don't necessarily need to be on stage. I think a musician can write music off a stage and do many different styles of music. I mean, it's really open. Just being able to do something related to music, I think, is enough for a musician or an artist who's gotten older, just to be a part of it in some way."

SEPULTURA is continuing to tour in support of its latest album, "The Mediator Between Head And Hands Must Be The Heart", which came out on October 29, 2013 via Nuclear Blast.