SEPULTURA's DERRICK GREEN On His First Impression Of Brazil: 'It Was Incredible'

SEPULTURA has just released "Sepulnation: The Studio Albums 1998-2009", which celebrates the Derrick Green era of the band. A five-album box set (across eight slabs of vinyl or five CDs),it contains the albums "Against", "Nation", "Roorback", "Dante XXI" and "A-Lex", all of which are half speed cut, remastered and back on 180-gram vinyl for the first time in a decade and also as a collector's CD box. In addition, the "Roorback" album features the rare "Revolusongs" EP, which is available for the first time digitally and saw the band celebrate their influences with covers of bands as musically broad as DEVO, EXODUS, U2 and MASSIVE ATTACK.

Speaking to V13.net about his first impressions of Brazil shortly before he officially joined SEPULTURA in 1998, Derrick said: "It was incredible. I'd never been to Brazil. I knew nothing about the culture [or] the language. I didn't have any Brazilian friends. I didn't know anything about it. I was completely ignorant [of] Brazil. I probably even thought that they spoke Spanish there, [like] a lot of people assumed. But I went to the library, got out a few books, because there was no real Internet at the time. I had my library card. I was, like, 'Okay, let me see what this place is about.' And it didn't do it justice. It didn't really exist in my mind until I was actually able to set foot in the country and meet people and start to talk to them. And then the realization of what this place is about started to brew in my head. And then, after living there for 20 years, it radically changed my view of Brazil."

He continued: "From the first time being there, where I didn't really live there, and I was just getting interactions with people who were super fans of SEPULTURA, which was the whole country, it semed. And walking around with [the guys in SEPULTURA] and everyone recognizing them and honking their horns and asking for autographs all the time, that was a trip. I was, like, 'Oh my God. These guys are getting…' I didn't know that, because, again, there was no Internet or anything; it was just, like, I had to be there. Then, [after] moving there, that started happening to me. 'Cause it had been a few years; people started to know, like, 'Okay, this is the new face of SEPULTURA.' So I had to adjust my life [to] getting recognized and kind of analyzed every time I went out of the house. And that takes some getting used to. I never imagined that; I never thought that would be my life. So it was rough. I have to say I was a little depressed because I'm not that type of person. I kind of like to be the fly on the wall and kind of check everything out. So, I was, like, 'Oh, man. I don't wanna draw any attention,' but it was impossible not to. [I'm this huge guy], like, 6'3 with dreads and tattoos. And they were just, like, 'You're huge. It's impossible not to see that's you from over there.' So that drew attention as well — just the way that I looked, and not only being in the band. But it was every day. [And] the majority of the time, [the reaction from the people was] positive, positive, positive — I mean, 99 percent of the time. Brazil was a place that always kept its faith in SEPULTURA with all the changes that happened. They always wanted to see the best for the band because [SEPULTURA is] such a strong representation of Brazil outside of Brazil."

Despite being Brazil's biggest-ever heavy music export, when SEPULTURA lost its original frontman and founder Max Cavalera in 1996, and Max's brother and drummer Igor Cavalera in 2006, many thought the band would not recover from their departures. However, in Cleveland, Ohio punk and hardcore scene veteran Green, SEPULTURA found a formidable, towering force that would lead the band with power and conviction through this new era of their career.

Any fans who feared that this new lineup of SEPULTURA would see the band taming its intense and heavy approach were not left disappointed when "Against" came out of the traps in 1998. With the powerhouse that is Igor Cavalera still on drums (he remained for four of the five albums),Andreas Kisser's grinding guitars and bassist Paulo Jr.'s heavy bottom end powered behind Derrick Green's guttural roar and SEPULTURA sounded heavier and more forceful than ever. This period would see the band continue to push their sound forward and challenge new sounds and styles, but they never lost sight of what was the core of the band. The righteous, rebellious nature remained with the 1998 album "Nation" calling for "one nation, Sepulnation," — a rallying cry that stayed with the band throughout their long and challenging career.

"Sepulnation: The Studio Albums 1998-2009" brings the focus back on a period of the band that may have been missed by early supporters and shows that the fire continued to burn bright throughout. 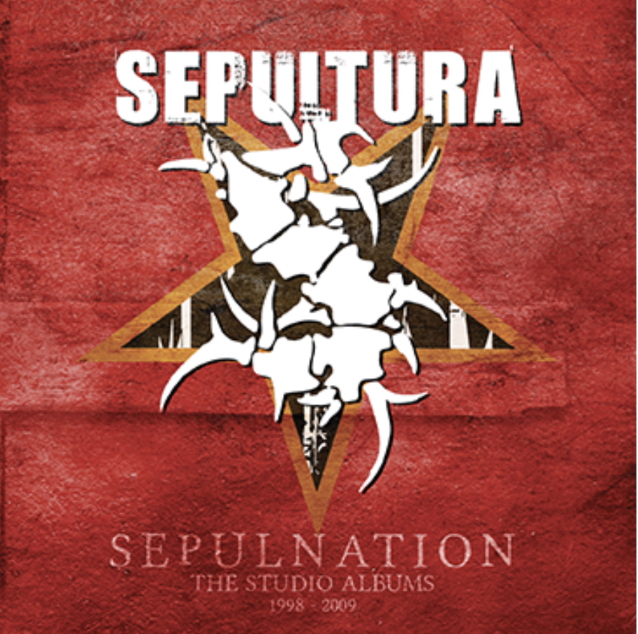 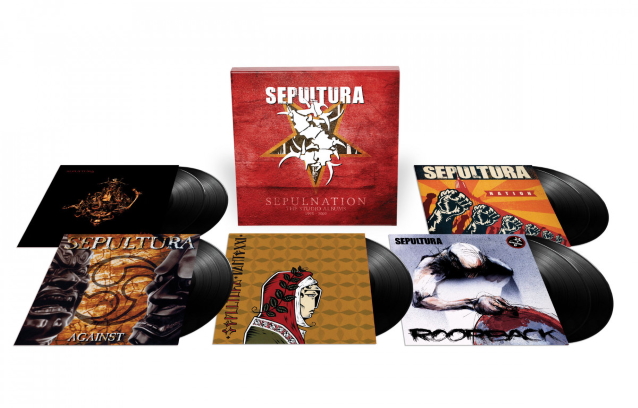