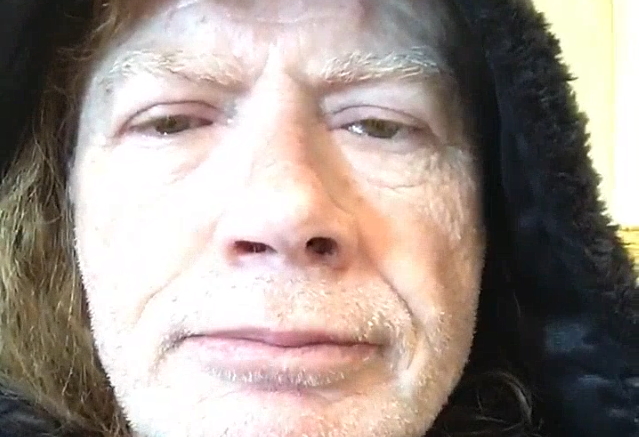 MEGADETH's Dave Mustaine has once again praised the band's current guitarist Kiko Loureiro, saying it him a "long" time to find someone who plays like Marty Friedman.

Addressing a fan named John who had a question about Friedman's guitar solo in the MEGADETH song "Tornado Of Souls" from the band's classic 1990 album "Rust In Peace", Mustaine said (as transcribed by BLABBERMOUTH.NET): "Hey, John, it's Dave Mustaine from MEGADETH. Hey, I got your question about Marty's solo in 'Tornado Of Souls'. And… What did I think about it when I first heard it? I loved it. But — you've gotta remember these songs were played before, and [former MEGADETH guitarist] Chris Poland had played on those. I'd have to listen back to Chris's solo to see how much of his performance had influenced Marty's solo.

"I guess I should say a little bit about Marty, too, and his performance, when you said that you thought it was like Picasso," he continued. "There's a lot of players out in the world that play like Marty. They're hard to find. If you're in a band and you're looking for someone like Marty Friedman, you'll see how hard it is by how long it took me to find Kiko. The other players I've had were great in between Marty, and I say that with all respect, but there's very few guys out there like Marty and Kiko."

Shortly after Loureiro's addition to MEGADETH in 2015, Mustaine called him "definitely the best guitarist we've ever had." His comments echoed those he made about the band's previous guitarist, Chris Broderick, during the latter's tenure in the band. Back in 2013, during the making of MEGADETH's "Super Collider" album, Mustaine wrote in a tweet that Chris was "without a doubt the best guitarist I've ever played with."

Mustaine told Revolver magazine that finding Loureiro "was really a mind-blower. It was the first time since Marty Friedman joined the band that I was really intimidated as a player," he said. "He's such an amazing talent, and he's been coming in with all of these fresh ideas." Mustaine added that Kiko was a good fit personality wise. "Chris [Broderick] and I had a good chemistry, but we weren't really as close as I would have wanted us to be," Mustaine explained. "Kiko, I feel like I've known him for years."

In 2009, Mustaine praised Broderick, saying in an online post: "I am going on record and I am saying unequivocally that Chris is THE BEST GUITARIST MEGADETH has ever had. And the real talented musicians in MEGADETH's alumni will agree, he is an absolute monster. I mean, he plays the catalog better than anyone did. Jeff Young never wanted to do Chris Poland's stuff, and so on, and so on, until the last guitarist we had before we disbanded over my arm injury."

Mustaine added: "It's funny, because just when I think [Broderick] can get no more outrageous, or any more thrilling with the guitar solos, he comes up with something really beautiful like Marty Friedman would do (he has Marty pretty well down pat),and then goes into the GIT styles that Jeff Young did, yet, there is still such a freshness to his playing and he is so raw, it's like having a new prize bull. And even though he ain't a such a young bull, he's definitely an old bull like me."

In the March 2008 issue of Revolver magazine, Mustaine stated about the musical chemistry of the band's "Rust In Peace" lineup: "I sang almost every single note of Marty Friedman's guitar solos, and I wrote the majority of Nick's [Menza] drum parts, and I wrote almost every bass note that [David] Ellefson played." He doubled down on those claims in a 2009 interview with Guitar World, where he said: "You know, people have heard me say that I 'sang' solos to Marty in the studio, and I did. I did it to [former guitarists] Jeff [Young], Chris [Poland] and Al [Pitrelli], too. But [then-MEGADETH guitarist] Chris Broderick? I only did it two times [on MEGADETH's 2009 album 'Endgame'], and there are literally hundreds of thousands of notes on 'Endgame'. Now that is a testimony to a guy who has studied his partner."