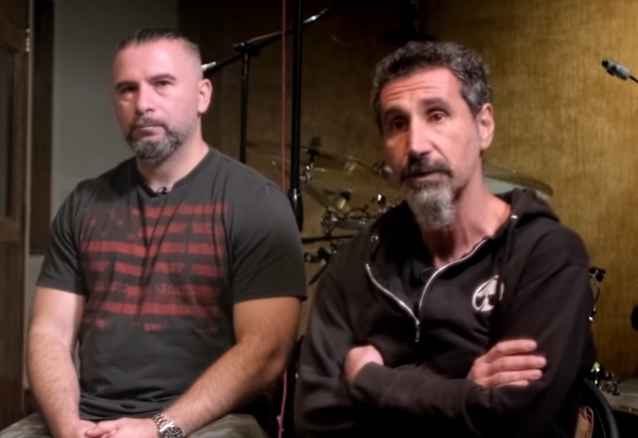 SERJ TANKIAN: I Love And Respect JOHN DOLMAYAN Very Much, But Not His American Political Views

SYSTEM OF A DOWN's Serj Tankian has admitted that he doesn't care for his bandmate John Dolmayan's opinions on American politics.

Last year, Dolmayan praised former U.S. president Donald Trump and accused Democrats of "demonizing" the real estate mogul and "blaming him for everything under the sun." The drummer also called Democrats "the true bigots" who "fought to maintain slavery" and were "directly responsible for 70 plus million abortions, a large majority of whom were black."

Tankian discussed his relationship with Dolmayan, who is also his brother-in-law, during a recent interview with Consequence Of Sound. He said: "We're very good friends, we're family, and he's my drummer in my band, so, of course, we've talked about many, many different things, including political views. When you don't agree with someone after a while about a certain topic … look, it doesn't mean that we don't agree about other stuff. We agree a lot about Armenian stuff, for example, a lot about family stuff, a lot of other things, a lot of personal stuff. But when it comes to American politics, we happen to be on the polar opposite ends of it, and we're both very passionate and vehement about our views, which is fine."

Last September, Dolmayan defended his reasons for voicing his political views that are ideologically opposed to those of Tankian, telling the "Deviant Gentlemen" podcast: "SYSTEM OF A DOWN has a legacy of being left-leaning, which isn't always the case. Serj, of course, is responsible for the lyrics, but they didn't always represent the band in the way that we maybe wanted [them] to. There's four individuals in the band. I don't speak for any of the individuals except for myself, and neither does Serj. But because he had that platform of writing lyrics, the perception was out there that that's how the band felt at all times, where I don't even think Serj necessarily felt those ways at all times. You're supposed to have diversity of opinion even within your own mind, and you should judge things based on information that's presented to you.

Last year, Dolmayan supported Trump's claim that his administration had done more for the African-American community "than any president since Abraham Lincoln." Meanwhile, Tankian had called for Trump to resign and described him as "completely useless" over his handling of the coronavirus outbreak.