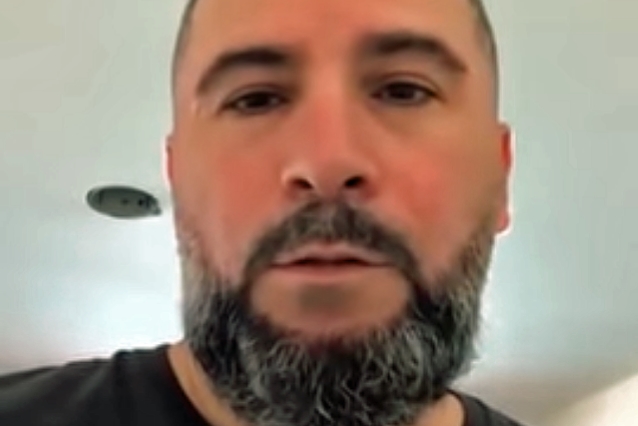 SERJ TANKIAN, M. SHADOWS, TOM MORELLO To Guest On SYSTEM OF A DOWN Drummer's THESE GREY MEN Project

SYSTEM OF A DOWN's Serj Tankian, AVENGED SEVENFOLD's M. Shadows and RAGE AGAINST THE MACHINE's Tom Morello are among the guest musicians who will appear on the upcoming album from SYSTEM OF A DOWN drummer John Dolmayan's THESE GREY MEN project.

Dolmayan first announced the formation of THESE GREY MEN in 2014, promising at the time that the project would produce a star-studded covers album and tour.

In a new interview with SOAD Mexico, Dolmayan offered an update on the disc's progress, saying (see video below): "I'm still working on it. It will be released within the next four months. All the songs are finished, but we're in the process of adding strings… And then, we're actually starting to mix some of the songs that have already been done. And there's some cool artists on it. Serj sang two songs, and the AVENGED SEVENFOLD singer, Matt, he sang a song. And then I have a bunch of other friends that came. Tom Morello played guitar on a song.

"So, I know it's been forever, but it will be released. I also had two kids between it, so when I had my kids, I stopped doing everything else and just concentrated on being a father. So, it takes time, but hopefully people will enjoy it."

THESE GREY MEN's debut album was originally supposed to include new renditions of songs by artists such as RADIOHEAD, OUTKAST, DAVID BOWIE and many more, recorded by a band of all-star players led by Dolmayan and his collaborator James Hazley, formerly of the band COCKEYED GHOST.

Dolmayan previously said that he got the idea to record a covers album because he often rearranges melodies in his head and thinks about how much fun it would have been to play on some of his favorite songs. "As for what it's going to sound like, it'll definitely have a rock feel, but not limited by any genre restrictions," he said. "Listeners are going to hear a plethora of sounds and styles."