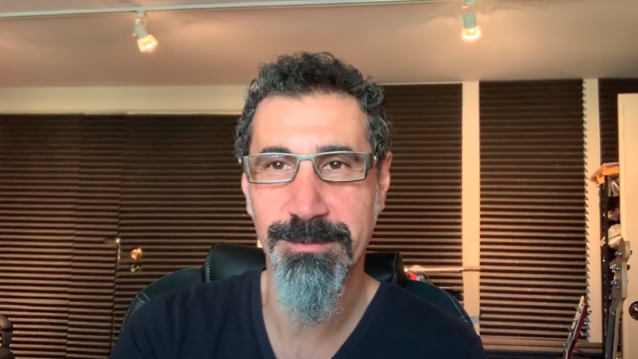 SERJ TANKIAN On SOAD Fans Who Don't Want To Hear His Political Ideas: 'Have You Not Listened To The Words In 20 Years?'

In a new interview with the "Side Jams With Bryan Reesman" podcast, SYSTEM OF A DOWN frontman Serj Tankian was asked how he reconciles in his mind the fact that some fans of his band's music may not agree with his political views. He responded: "I don't. I've always explained music like pizza — some people like the crust, some people like the cheese, some people like the topping. So when I get people on my socials that are, 'I love your music, but I don't wanna hear your political ideas,' that's fair enough — if they're nice enough, it's fair enough, but sometimes they're really mean. But what I don't understand, and a lot of other people that follow the music say the same thing — they're, like, 'Have you not listened to the fucking words in 20 years? He's been saying all this stuff through his music all this time. What are you, just dancing to it because it's groovy? You're not really getting the message?' And that's okay, too, obviously — people just like hard music; they wanna listen to hard music. They never even thought that [the SYSTEM OF A DOWN song] 'B.Y.O.B.' is anti-fucking-imperialist — maybe. I don't know — I don't know how you can, but I guess maybe. So it's very interesting to me, seeing that.

"The only thing I can say about that is that we need to spend more on public education. [Laughs] One of the few things that could be a great solution to our long-term environmental possible self-destruction and all of that, and the easiest way to start fixing it is first fixing us — we have to fix us first."

Tankian's comments come just a couple of days after his SYSTEM OF A DOWN bandmate John Dolmayan praised Donald Trump, calling him "the most attacked president in history yet the greatest friend to minorities."

Dolmayan also shared a meme featuring Trump's claim that his administration has done more for the African American community "than any president since Abraham Lincoln."

The drummer wrote: "Let's not let the narrative that's being spun make us forget the truth of this statement. The most attacked president in history yet the greatest friend to minorities! Don't believe it? Look at the stats. Don't like it, doesn't change the truth of it."

In a separate Instagram post, Dolmayan shared a photo of retired St. Louis police captain David Dorn, who was shot by people who allegedly broke into a pawn shop after protests over George Floyd's death turned violent.

Dolmayan's views are in sharp contrast to those of Tankian, who called this week for Trump to resign and described him as "completely useless" over his handling of the coronavirus outbreak.