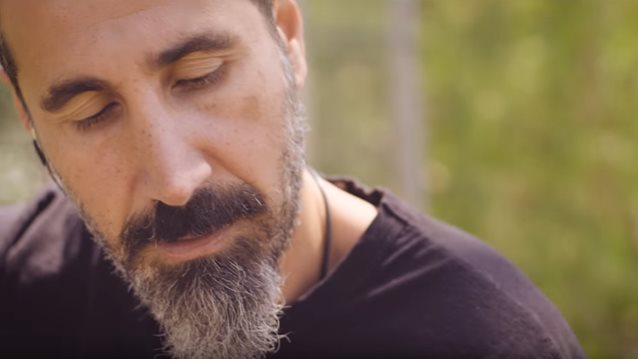 Grammy-winning singer-songwriter and activist Serj Tankian has released "Aurora's Dream", a song he was commissioned to write for the recent "Aurora Prize" ceremony in Yerevan, Armenia.

"Aurora's Dream" was featured as the main theme song for the inaugural "Aurora Prize" ceremony, which was organized by the 100 Lives initiative to honor individuals whose actions have had an exceptional impact on preserving human life and advancing humanitarian causes. On behalf of the survivors of the Armenian Genocide and in gratitude to their saviors, an Aurora Prize Laureate will be honored each year with a $100,000 grant as well as the unique opportunity to continue the cycle of giving by nominating organizations that inspired their work for a $1,000,000 award. Though the April event was the first official ceremony, it marked the second time an Aurora Prize has been awarded.

"'Aurora's Dream' is the result of some of my best compositional efforts in years," said Tankian. "I'm glad it was for the 100 Lives organization and for the wonderful things they're doing with bringing attention to devastating tragedies and the real heroes that rise to the occasion, especially with their Aurora Prize events."

An instrumental version of "Aurora's Dream" served as the backdrop to "Aurora", a film by Eric Nazarian that was featured during the ceremony.

"Aurora's Dream" follows the recent release of "Artsakh", an acoustic song Tankian wrote in support of the people of Artsakh, a former region of Soviet-era Azerbaijan.

"These people have lived on those lands for thousands of years," said Tankian. "They have great struggle but also great beauty written on their foreheads. The whimsical appropriation of land by an empire (Stalin) placed them under Azerbaijan. They have since gained their independence and have lived a prosperous existence for the last 20 or so years. I do not believe in wars and ultimately borders but I deeply believe in self-determination and life without oppression. Therefore it is time for the world to recognize them as the Republic of Artsakh (Nagorno-Karabakh)."

Tankian recently composed the soundtrack for "The Last Inhabitant" and just released the soundtrack for "1915", a film created by writer-directors Garin Hovannisian and Alec Mouhibian about the Armenian genocide, an attempted extermination of the Armenian people by the Ottoman Empire. From 1915 through 1923, 1.5 million men, women and children were starved, shot, beaten and banished to die in the desert during one of history's greatest crimes. Though considered by many to be the first genocide of the 20th century, the Turkish government denies it ever happened. For Tankian, who's worked tirelessly over the years fighting for genocide recognition, it's a topic close to home.

With his band SYSTEM OF A DOWN, Tankian last year commemorated the 100th anniversary of the Armenian Genocide with a global arena tour that included the group's first-ever performance in Yerevan's Republic Square.