SEVENDUST has announced another leg of its tour celebrating the 21st anniversary of its "Animosity" album. Support on the trek will come from NONPOINT, BASTARDANE (the new band featuring drummer Castor Hetfield, son of METALLICA frontman James Hetfield) and BURDEN OF THE SKY. Tickets will go on sale on Friday, July 8 at 10 a.m.

SEVENDUST previously played all of "Animosity" on two separate U.S. tour legs in early 2022. Prior to that, the band performed "Animosity" at a January 2021 livestream event from Opav in Orlando, Florida. At the time, singer Lajon Witherspoon told Midwest Beatdown: "Oh my God. There's some songs on [that album] that we've never played, I think. It's gonna be fun to get back and do it, and also to play some of those songs we've never had the time to play, and to see each other again and to laugh with each other and look at each other, and start jamming and somebody's back breaks or falls out, because we're old now.

"I'm really looking forward to getting back and doing 'Animosity' and having a good time, and hopefully bringing some type of sense of weird normalcy in this world that we're trying to navigate through during this pandemic," he continued. "And I can't believe it's gonna be 20-something years since we recorded it. Oh my God.

"So many people have been asking for it, so that was another weird thing. It was, like, 'We've gotta do this,'" Lajon added. "And I've kind of gone [back] and listened to the songs, and there were some really cool songs. And what a great time in our careers as young men growing up and just kind of learning about life and the industry and everything that was going on with it. It's just really cool."

SEVENDUST's 13th studio album, "Blood & Stone", was released in October 2020 via Rise Records. The follow-up to 2018's "All I See Is War" was once again tracked at Studio Barbarosa in Gotha, Florida with producer Michael "Elvis" Baskette, who has previously worked with ALTER BRIDGE and SLASH, among others.

SEVENDUST recently completed the songwriting sessions for its next studio album at a Kentucky farmhouse near the home of the band's lead singer Lajon Witherspoon. The group will enter the studio in early July to begin recording the follow-up to "Blood & Stone" for a 2023 release.

Last December, SEVENDUST released a digital expanded edition of "Blood & Stone". "Blood & Stone Deluxe" contained five new tracks, including three never-before-released remixes and two newly recorded songs. Jake Bowen of PERIPHERY, Richard Wicander of FIRE FROM THE GODS and Justin deBlieck, formerly of ICE NINE KILLS, provided remixes and the band finished recording "All I Really Know" and "What You Are" specifically for this release. "Blood & Stone Deluxe" was released via all digital partners via Rise Records and was produced by Michael "Elvis" Baskette.

Last month, drummer Morgan Rose told "The Jasta Show" that SEVENDUST won't hit the road in support of its next studio album until 2023. He also revealed that "there's not gonna be many [tours] left, I'll just tell you that. I'm gonna be the one to let all the cats out of the bag, but I can just tell you that we're not gonna be around, full-fledged, forever, that's for sure," he added cryptically.

This past March, Witherspoon told St. Louis Post-Dispatch that "Blood & Stone" shows SEVENDUST is "still standing the test of time. It was great to do the album with [Baskette] in Florida again. It was a good time. We wanted to hit [listeners] hard and let them know we still got it and that we're not afraid to put slower songs out there too."

As for the decision to release a "deluxe" version of the LP, Lajon said: "We wanted to put some extra songs out there, B-sides that people hadn't heard. It's a little more of a treat." 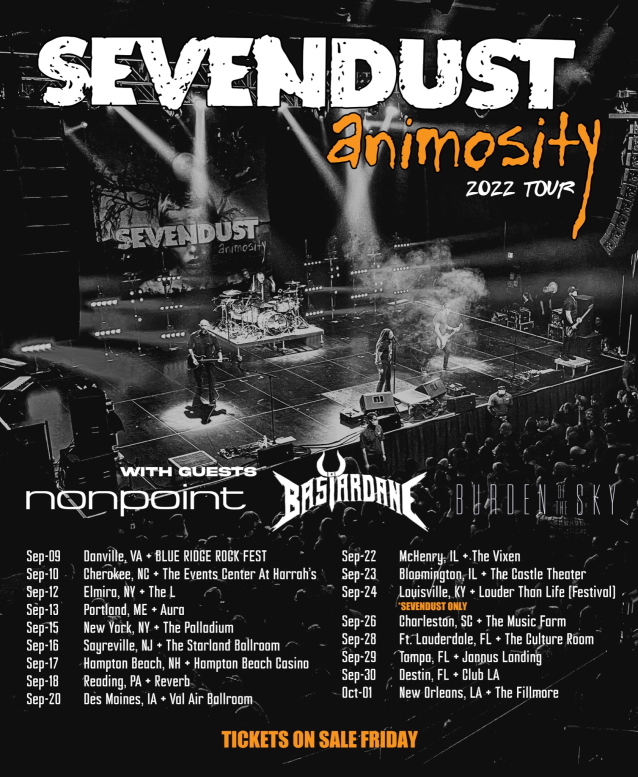