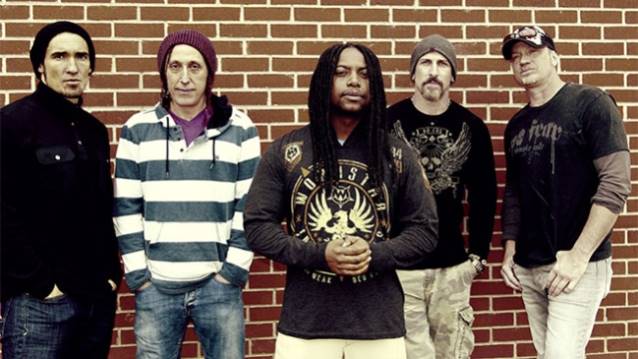 Speaking to All Access Live during this year's ShipRocked cruise, SEVENDUST drummer Morgan Rose said (see video below): "We haven't written one [new] song yet, but we're going into the studio in a week [to record the CD]. It's amazing. I love it. We do everything that way."

"I love being as heavy as we can be but Lajon [Witherspoon], he's a melodic singer, and I think he's going to be excited about a lot of stuff. As heavy as we're trying to be, there's still a ton of melody on it.

"I know Clint [Lowery, guitar] is busy writing a ton of demos and everyone is trying to get back into that headspace."

SEVENDUST's latest acoustic album, "Time Travelers & Bonfires", sold around 15,000 copies in the United States in its first week of release to debut at position No. 19 on The Billboard 200 chart. The CD was made available on April 15, 2014 via 7Bros. Records, in conjunction with ADA Label Services. It is a collection of brand new songs, along with re-recorded SEVENDUST classics. Newly re-recorded songs include "Black", "Gone", "Denial", "Karma", "Trust" and "Crucified". Six brand new songs have also been written and recorded for the acoustic album. It's not the first time SEVENDUST has explored their acoustic side. Their critically acclaimed "Southside Double-Wide" live acoustic album was released in 2004.

Getting ready for day 1 officially with Sevendust in the studio! Song one already started on day zero....