SEVENDUST has announced its first-ever livestream and its only show of 2020: "Sevendust: Live In Your Living Room". The event will take place on October 23 — the release date of its 13th studio album, "Blood & Stone", via Rise Records. The show will be live starting at 9:00 p.m. EDT/6:00 p.m. PDT and available globally at the corresponding hour for each territory. This will be a SEVENDUST show not to be missed as the band will not have any tour dates until 2021.

SEVENDUST states: "Yes, this show is the same day as the release of our new album, 'Blood & Stone'. We will be performing a livestream concert to celebrate, just for you! Get access now and you could enter a raffle which includes the first prize of a 7D signed acoustic guitar…and more. PLUS, shop for some brand new merch at our digital merch table. As you checkout, make sure you also grab our new 7D LIVE IN YOUR LIVING ROOM event t-shirt (limited to this show) and a copy of 'Blood & Stone' on CD. We hope to 'see' you all there!!!"

Tickets for the live stream are $17.00 and available here.

The follow-up to 2018's "All I See Is War", "Blood & Stone" was once again tracked at Studio Barbarosa in Gotha, Florida with producer Michael "Elvis" Baskette, who has previously worked with ALTER BRIDGE and SLASH, among others.

From the pulsating intro of opener "Dying To Live" to the album-closing cover of SOUNDGARDEN's "The Day I Tried To Live", SEVENDUST continues to push the sound it has made their own for more than 25 years. Tracks like "Love", "Blood From A Stone", "Kill Me" and "Against The World" showcases why the band has been adored by fans and critics alike. Lajon Witherspoon, Clint Lowery, John Connolly, Vince Hornsby and Morgan Rose have raised the bar with "Blood & Stone". The new music fits perfectly alongside with the bands most seminal tracks that have become the cornerstone of the band's live performances.

Lowery spoke about the new SEVENDUST LP in an interview with Front Row Entertainment Live. The guitarist/vocalist said: "I think this is one of our strongest records in a while. I'm proud of all the music we do. Every band likes to say, 'Oh, yeah, the new record is the best one we've ever done.' I think it's a very reflective record for where we're at musically, where we're at as a band. So that's always a goal. I think we just wanna be genuine. We don't wanna put out a dud record. Not everyone's gonna like it; we understand that. We just try to do what we do best. We're not the heaviest band in the world; we're not a pop-rock band at all either. We're just this aggressive band that has our own thing, and we stay true to that." 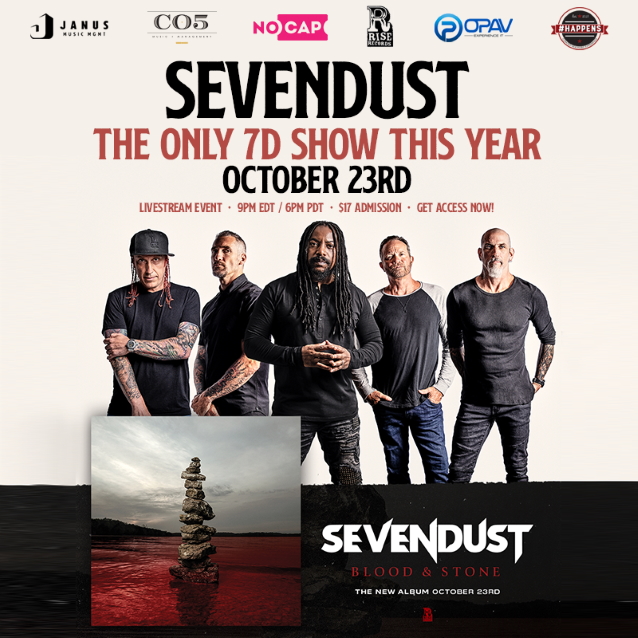