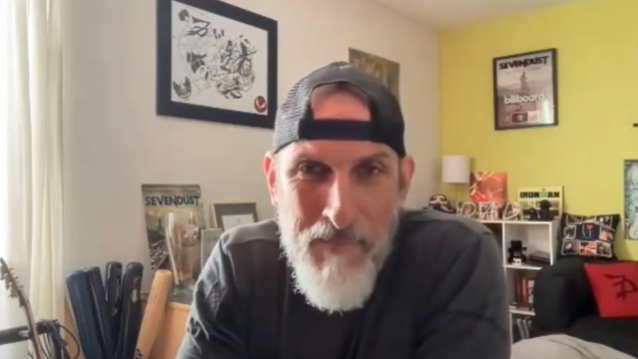 In a new interview with George Dionne of KNAC.COM, SEVENDUST guitarist John Connolly addressed drummer Morgan Rose's recent revelation that he and his bandmates have discussed a possible "end date" for the group.

Connolly said (as transcribed by BLABBERMOUTH.NET): "It's funny. Any time that we talk about this stuff, people are, like, 'Oh, that's it. They're quittin'. It's the end.' It's really not that at all. I mean, we're realists. We ask ourselves, are we gonna be jumping off trampolines and drum risers and stuff when we're 80? Are we gonna wanna do 300 shows a year when we're 80? Probably not. But I look a band like THE [ROLLING] STONES and I go, but you can still go out and do something whenever you wanna do it. So that's sort of what we've… I think what we're doing is we're looking at making records — at some point in time making records and doing a big tour to support the record. I don't think it's gonna be something that we're gonna wanna do like we're doing it now.

"As you get older, the family time starts to weight down on the scale, as it should. And we've all got families and we've all got kids of different ages, going through different points — some are in elementary school; some are getting ready to go to college; some [are] drivin', which is crazy. There's more to life, and I think we've all appreciated the fact that we wanna nurture SEVENDUST to the point where we could perpetually do it forever. But you're not gonna see us three times coming through New York City on a tour. If we come through once, okay.

"It's funny, 'cause it's, like, okay, how many bands have said that they're gonna retire from touring and then all of a sudden [they are back]? That'll be us," Connolly admitted. "We could come in and say, 'There's not a chance that we're gonna play another show. We hate each other.' Two years later, we're gonna be out back out there going, 'You know what, man? We really didn't mean it. We probably shouldn't have reacted so quickly. We're down. We're gonna do it again.'

"MÖTLEY [CRÜE], they had contracts, and they're out doing a stadium tour. I'm, like, they should. You know what I mean? If you wanna play, play. And that's sort of what we're gonna do. I think we're just gonna move from the point of having to do it and having that be something that people have expectations on.

"The thing about it is to make a full-length record these days, I know people are into it, but people just want music," Connolly said. "They don't really care whether they get 10 songs every two years or whether they get a song or two every month, two months, which I think would be a more interesting model to go down anyways, because you can just — as you create, you'll know your moments. There's always gonna be those two or three songs that are, like, 'Oh, wow. I can't wait to play this for the guys.' And then you go, 'Let's go hop in the studio for two days. Let's go sit with Elvis [producer Michael Baskette] for two days, punch two or three songs out, stick 'em in a can, and then do that two or three times. And then if you wanna release a record, release a record. If not, EPs are super popular right now… Those kind of moves are the moves that, I think, are gonna keep the business… I think it's gonna keep fans engaged because you're not giving them the playbook, going, 'Okay, on this day here, here's the EPK. Here's the bio.' We've done it the traditional way. Sometimes that whole, 'Let's just drop it. Let's go record it and just drop it — drop the video, drop whatever.' So that, I think, is more interesting to all of us as we get a little older. Just any way that we can kind of keep it fresh.

"We're in a really good headspace in the SEVENDUST world… So that's why we're not saying 'never,' but we are saying at some point it's gonna get different. So you all don't be thinking you're gonna take a three-week vacation and follow SEVENDUST around on tour. You might take a week and follow us on tour, but I don't know if three weeks is gonna be necessary anymore."

Last month, Rose told "The Jasta Show" that SEVENDUST won't hit the road in support of its next studio album until 2023. He also revealed that "there's not gonna be many [tours] left, I'll just tell you that. I'm gonna be the one to let all the cats out of the bag, but I can just tell you that we're not gonna be around, full-fledged, forever, that's for sure," he added cryptically.

SEVENDUST recently completed the songwriting sessions for its next studio album at a Kentucky farmhouse near the home of the band's lead singer Lajon Witherspoon. The group will enter the studio later this month to begin recording the follow-up to 2020's "Blood & Stone" for a 2023 release.

Last December, SEVENDUST released a digital expanded edition of "Blood & Stone". "Blood & Stone Deluxe" contained five new tracks, including three never-before-released remixes and two newly recorded songs. Jake Bowen of PERIPHERY, Richard Wicander of FIRE FROM THE GODS and Justin deBlieck, formerly of ICE NINE KILLS, provided remixes and the band finished recording "All I Really Know" and "What You Are" specifically for this release. "Blood & Stone Deluxe" was released via all digital partners via Rise Records and was produced by Michael "Elvis" Baskette.

Earlier this week, SEVENDUST announced another leg of its tour celebrating the 21st anniversary of its "Animosity" album. Support on the trek will come from NONPOINT, BASTARDANE (the new band featuring drummer Castor Hetfield, son of METALLICA frontman James Hetfield) and BURDEN OF THE SKY. Tickets will go on sale on Friday, July 8 at 10 a.m.

SEVENDUST previously played all of "Animosity" on two separate U.S. tour legs in early 2022. Prior to that, the band performed "Animosity" at a January 2021 livestream event from Opav in Orlando, Florida.