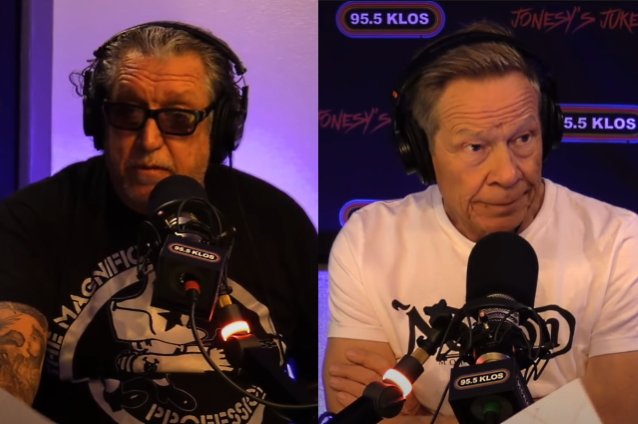 SEX PISTOLS guitarist Steve Jones and drummer Paul Cook have blasted frontman John Lydon for his disparaging comments after he lost a legal battle over the right to use the band's songs in the upcoming biopic miniseries about the U.K. punk legends.

"Pistol" is a six-episode series about Jones. It is based on Steve's 2018 memoir "Lonely Boy: Tales From A Sex Pistol" and it is being helmed by Academy Award winner Danny Boyle, who serves as executive producer and director.

Jones and Cook have argued in court that an agreement they signed with Lydon meant decisions regarding licensing requests could be determined on a "majority rules basis."

However, a judge ruled last month that the contract was valid and active, and that the majority of the band could overrule any individual member's veto.

In a statement posted on his official web site, Lydon — better known as his alter ego Johnny Rotten — claimed that he only made aware of the announcement of "Pistol" hours before it was made, and he had no idea how the band would be portrayed in it. He also called himself "the creative force of the SEX PISTOLS" in addition to being "the lead singer and songwriter, front man, image, the lot, you name it".

Now, Jones and Cook have released a new statement in which they disputed Lydon's assertion that he was the only member of the SEX PISTOLS of consequence and they once again took issue with Lydon's claim that he had no idea a show was in the works until very late into proceedings.

The statement from Jones and Cook reads: "Despite John Lydon's comments on his website, we reiterate that he was informed of the 'Pistol' TV series, offered meetings with the director and to be involved in the show months before principal photography began. He refused these offers and we were saddened he would not engage and at least have a conversation with the director Danny Boyle and co-showrunner Craig Pearce."

It continues: "And while John's contribution is rightly acknowledged, his claims to be the only band member of consequence are hard to take. Steve, Paul and Glen started the band and it was completed when John joined. All songs on the band's seminal 'Never Mind The Bollocks' album were written by Paul Cook, Steve Jones, Glen Matlock and Rotten except 'Holidays In The Sun' and 'Bodies' which were penned by Cook, Jones, Rotten and Vicious. In addition, 'Pistol' is based on Steve Jones' book 'Lonely Boy'.

"John Lydon sold his rights to control the use of these songs in the 1990s in return for money. The majority rule agreement existed as a result — so no outside party could dictate the use of the band's music. And to have a mechanism in place if one member was unfairly blocking the decision making process — which is what happened in this instance.

"The rest of the band and many others involved in the punk scene of the time are all involved in the 'Pistol' TV series. Danny Boyle, has worked with the PISTOLS previously and is a highly respected, Oscar winning filmmaker. He understands the band and experienced the time that made them."

Earlier today (Tuesday, September 7),Lydon appeared on "Good Morning Britain" where he launched into a tirade against his bandmates and Boyle, saying: "They kept the whole operation a secret behind my back… and then slung a nasty little email to us on January 4 of this year saying they demanded my permission [to use the music]. The obvious question for me is permission for what? And bam, there it is. A few days later spread out all over the Internet about what a lovely documentary this is going to be on punk, using pictures of me and my wife Nora. They know she's ill, this is not nice of them to do that.

He added: "I didn't actually deny permission, I merely asked a question."

Lydon went on to call Jones and Cook "filthy liars" over their claim that he was informed of the "Pistol" series, offered meetings with the director and to be involved months before principal photography began.

"When they say I was informed, they don't certify a date… Two-faced hypocrites," he said. "How are you gonna do a documentary on punk without, hate to be pretentious about this, without Mr. Rotten?"

"Pistol" was created by Craig Pearce and written by Pearce and Frank Cottrell Boyce.

Anchored by Jones's memoir, which offers a new perspective on one of rock's greatest ever stories, "Pistol" moves from West London's council estates, to Vivienne Westwood and Malcolm McLaren's notorious Kings Road SEX shop, to the international controversy that came with the release of "Never Mind The Bollocks", which is frequently listed as one of the most influential albums of all time. Their single "God Save The Queen" was banned by the BBC and reached No. 1 on the U.K.'s NME chart, but appeared at No. 2 on the official U.K. singles chart, leading to accusations that the song was purposely kept off the top spot. For the only time in chart history, the track was listed as a blank, to avoid offense to the monarchy.