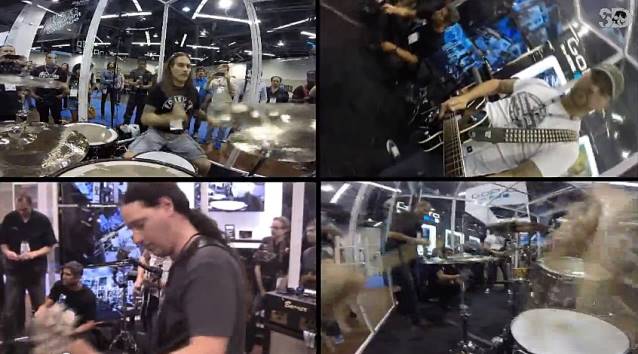 Sick Drummer Magazine has uploaded video footage of Derek Roddy (HATE ETERNAL, NILE, TODAY IS THE DAY),Gus Rios (MALEVOLENT CREATION) and Jason Bittner (SHADOWS FALL) performing an instrumental cover version of SLAYER's "Angel Of Death" at this year's NAMM (National Association Of Music Merchants) show, which was held January 23-26 at the Anaheim Convention Center in Anaheim, California. The clip, which is dedicated to the memory of SLAYER guitarist Jeff Hanneman, can be seen below.

Lineup for the "Angel Of Death" performance:

Jeff Hanneman died last year from alcohol-related cirrhosis of the liver. He is credited for writing many of SLAYER's classic songs, including "Angel Of Death" and "South Of Heaven".

The guitarist, who passed away in Los Angeles on May 2, 2013, had actually not been playing with SLAYER for more than two years since he contracted necrotizing fasciitis, also known as flesh-eating disease, from a spider bite in his backyard in January 2011. The infection ravaged the flesh and tissues of Hanneman's arm, leading to numerous surgeries, skin grafts and intense periods of rehab that forced him into semi-retirement and left him near death at several points.