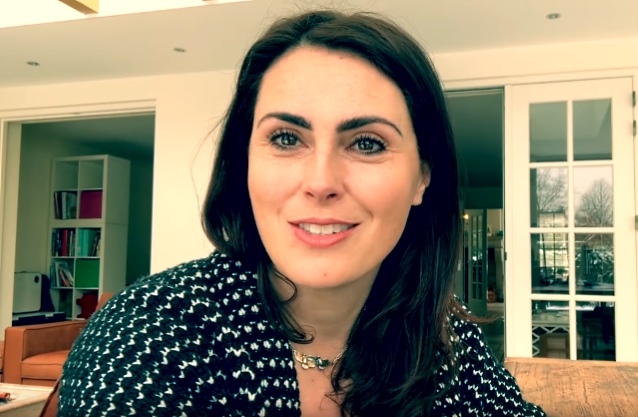 Germany's Radio Bob! recently conducted an interview with frontwoman Sharon Den Adel of Dutch metallers WITHIN TEMPTATION. You can watch the entire chat below. A few excerpts follow (transcribed by BLABBERMOUTH.NET).

On collaborating with PAPA ROACH frontman Jacoby Shaddix on the song "The Reckoning":

Sharon: "We met in Belgium about three years ago. We were playing at a huge metal festival and we were located in the backstage next to each other and bumped into him and I've always been a fan. 'Hey, you're in PAPA ROACH. I've always been a fan.' He also knew us, so we were, like, 'Yeah!' He immediately went up in my ladder of great people. [Laughs] No, just joking. He's a really nice guy, [with] a lot of energy and positive energy. We just talked about art, not even about music. One, I like his music. Second, he's a nice guy. And third, [I thought to myself] if I ever have a song that really fits his voice, we're going to ask him. I think it was a week before we started the video for 'The Reckoning', I already sang everything front to back myself and we were thinking, 'Oh, actually, it would be nice to have a duet on this song. But who can we ask?' It was pretty late because everything was recorded and we were going to do a video in seven days. 'Jacoby. We should ask Jacoby.' We sent it to his management. He was in the studio and he said, 'There's a lack of time. My family is not going to like that I have to do another thing, but I'll ask my wife.' His wife said, 'I like this song. I love it. You can do it!' That's what he told us. [Laughs] That was funny. He was in the studio and did it beside all the stuff he had to do. He sent me the files and that's how it went. It was easy. Done in a week."

On what the song "The Reckoning" is about:

Sharon: "It has to do with the album title, 'Resist'. I grew up in the digital age. You're a bit younger than I am, but I had a Commodore 64. You had floppy [disks] to play your games on. Anyway, I never thought the Internet and social media would become as big as it is today. Songs on 'Resist', most are personal songs where you have your own battles, but songs like 'The Reckoning' and 'Raise Your Banners' are really about, well, we felt there should be more awareness about our privacy laws. I think our governments really failed in protecting us against big companies because any time I go on the Internet, everybody's trackable and traceable through cookies — you give so much for free. People don't know what they're giving away. It's also difficult to get out of the system. How do you remove it? It's possible, but most people don't know how to. What we do for the album, when you go to our website, you have to accept cookies, but then we show you what we know when you do accept cookies. For instance, we know your postal address. When I go to Google maps, I can see where you live. I can see what your house looks like; I can even go there. That's crazy that everything is so accessible to everyone. That there's nothing to protect you."

On why WITHIN TEMPTATION has taken five years to follow up 2014's "Hydra":

Sharon: "I did a solo album called MY INDIGO. There was a certain time when I came back from the 'Hydra' tour that I wasn't sure I wanted to continue with WITHIN TEMPTATION. I've been touring for a long time. I'll keep this short, but it leads to the reason why we changed our music a bit. The fact was I was really tired of being in this roller coaster of writing an album, going on tour, doing festivals, going to a theater tour, then writing a new album again. It's always the same thing. I've done this my whole adult life. I love it and I wouldn't change anything, but the thing is, I also missed out on a lot of stuff. For me, it was a total roller coaster of accepting the choices I made in the past and the highs and lows of the band that we never dealt with. For me, it was time off, a break to figure out what I wanted to do in the future. Do I want to continue for 20 more years or do something different? I couldn't write for WITHIN TEMPTATION because it's very powerful music and everything. I didn't feel powerful and I didn't feel this… the atmosphere that WITHIN TEMPTATION had at the time because it's very powerful, it's being on the barricades at the same time, but I didn't feel like that. I had to do a step back and I wrote MY INDIGO, which is totally different, then I got really inspired by urban music. When I finally dealt with the whole process of what I wanted to do in the future, I found my way back to WITHIN TEMPTATION, I found a new direction, not just me, but the whole band. You don't really know which direction to go with the music. Because I did this MY INDIGO project and I was inspired by urban music, we learned a lot from how you make different sounds again, also, putting our heavy stuff on top of it, like the heavy guitars and everything. It became WITHIN TEMPTATION again, but in a totally different vibe. More laid back, groovier. I was, like, 'This is actually really cool.' We were happy. We found a new fire. It came together with this political view with things we wanted to say. It really gave us a new fire that we believe in that we can still bring something for the future and there's still something we want to say to our audience and the people who listen to our music."