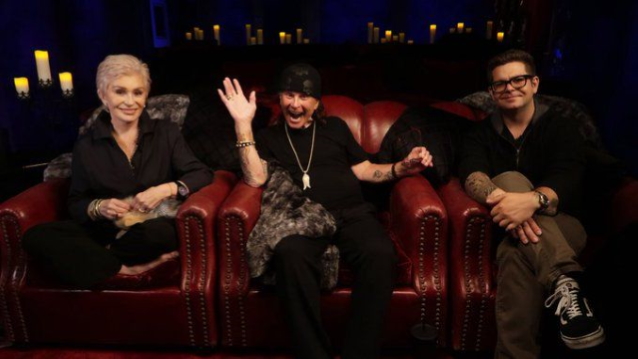 During an appearance earlier today (Friday, July 10) on "The Talk", Ozzy Osbourne's son Jack Osbourne revealed how he used his multiple sclerosis diagnosis to help his father through his journey with Parkinson's disease.

"I think it's a very different thing with Parkinson's versus M.S., but the one thing that I've always kind of encouraged from the jump was you can kind of turn lemons into lemonade with this," Jack said (see video below). "And just be honest and be that person that someone in the middle of nowhere, who's got no one, can look to for inspiration. I think it takes a lot of guts to come out and go, 'Hey, I've got this thing wrong with me, and it sucks, but I'm dealing with it,' because people can relate to that. People might not be able to relate to my dad as a musician or being a world-renowned rock star, but now that person with Parkinson's can go, 'Oh wait, I can relate to this man, because he's dealing with the same thing I [am], and that's giving me hope.'"

"That was kind of like a marker for my dad," Jack said. "It was, like, 'Hey, you've had this bad fall; you've had the surgery; your Parkinson's is kind of in a flare-up.' And it was, like, 'You need to be better enough to come. That's the goal.' And he did it. And it was one of those things where I never thought I would be at my kids' school with my dad."

"When you make a doc like this, it's a totally collaborative effort, and I'd done a documentary on my dad about 10 years ago. When A&E approached us, they were, like, 'We wanna do an A&E biography on Ozzy,' and everyone was on board. And the kind of stipulation for us was, we don't wanna make the same A&E biography that people have seen — this very kind of plug-and-play-type bio piece. Our director, Greg Johnston, who the family's worked with since 'The Osbournes' — he was one of the executive producers of that back in 2001; he knows the family better than anyone. And he came on board, and we basically said, 'All right, let's take the gloves off and get really honest.' And we gave him every bit of footage we have from 50 years of my dad's career. Creatively, it was very much Greg's vision, and I think he knocked it out of the park. Even mom [Sharon], who's been the kind of overwatch of Dad's entire life, I remember when we did the first screening for it, [she] really [was], like, 'Okay, that's good.'"

Sharon confirmed that she gave the documentary her stamp of approval. She said: "I was really, really surprised. I didn't think that it was gonna be that honest and that good."

Four months ago, Sharon revealed that Ozzy was forced to cancel his trip to Switzerland to see a doctor who specializes in treatment of Parkinson's disease.

Ozzy was scheduled to travel in April for radical treatment to help him live with his progressive neurological condition. But Sharon said on "The Talk" that as movement around the world has become more restricted due to the coronavirus pandemic, Ozzy had no choice but to call off the trip for now.