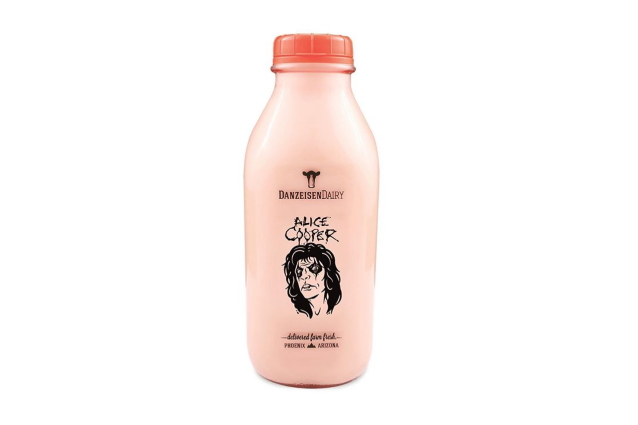 Danzeisen Dairy will release a special edition Alice Cooper chocolate milk bottle at retail grocers and for home delivery across Arizona this fall. Proceeds will benefit Solid Rock, the nonprofit organization Alice and his wife, Sheryl, founded in 1995. The organization operates The Rock Teen Center, a 28,000-square-foot facility in Phoenix where people ranging from ages 12 to 20 can get free instruction in music (both instrument lessons and recording studio training),dance, art, film and photography, among many other artistic options.

This past April, Alice told SPIN magazine that Solid Rock is something he and his wife feel driven to do.

"We're based on a Christian ethic," he said. "The kids say, 'Why are you doing this?' and we tell them, 'Because the Lord told us to. We don't want anything from you except you to show up and create.' And they say, 'Well, what do you get out of it?' And I go, 'Watching you create!' That's all there is to it." Another reason for doing this, he added, is that "We feel that every teenager is at risk — not just the ones that come from the gang world. They're all in trouble unless they have some guidance."

Alice told EastValleyTribune.com that the teen center provides kids with an opportunity to find a purpose in life.

"We've noticed there were kids coming in and parents would say to us, 'I don't know what you're doing, but my kid's getting better grades. My kids are talking to me now. My kids are wanting to do things at home with us because when they get into that school, they open up,'" Alice said.

"It's easy when you're a teenager to get introverted because you're, everybody's against me," he added. "I was a teenager. I was like that."

Cooper said his reason for funding the centers is to give youngsters a calling in life.

"There's nothing like watching a student perform or achieve something in music they never thought possible, he said.

"You can blossom. You have that option to blossom," he added. "And I noticed kids that blossom are the ones that are really going to do something."

We are rocking it for chocolate filming AZ rock legend Alice Cooper Alice and Sheryl Cooper’s Solid Rock Foundation will...